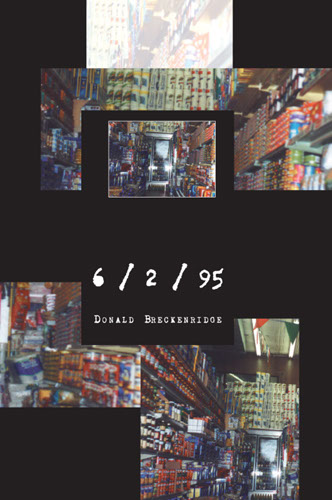 Set in New York City on June 2, 1995, this brilliant debut novel explores the dimensions and events of a single day through the lives of fifteen characters. Juxtaposing the motivations and actions of, among others, a liquor store clerk, a single mother, two young lovers, an aspiring painter, an illegal immigrant, an alcoholic and a dying stray cat, 6/2/95 depicts the fabric of life in New York City in the mid-1990s. Fluidly moving between narrative perspectives and story lines, 6/2/95 proposes a new structure and form for the novel at the beginning of the twenty-first century while at the same time presenting an absorbing and humorous tale.

Breckenridge, a playwright, here turns the novel into a dramatic form. Fifteen characters—among them a painter, a Salvadoran immigrant, an alcoholic, a single mother, and an unemployed writer—travel through New York City on a single day in 1995. As they pass each other on the street, speak on the phone, make love, argue, cheat, and stand each other up, their paths intersect or narrowly miss in a finely choreographed Altmanesque dance. Breckenridge's paragraphless, interlocked text is at times brilliant, at times confusing, but always surprising, and his bumbling, struggling New York is one we can all recognize.

Donald Breckenridge’s debut novel proves that to delight in the pleasure of writing can be everything but solipsistic. His respect for the reader’s  intelligence, paired with a masterful ability to convey both the isolation and unending possibilities of life in the city constitute his rare and much appreciated gift.

Simultaneity is the project of this ambitious first novel, how our lives echo and shadow each other endlessly. Impressive and full of deep compassion, Breckenridge has woven together the chorus that is New York City.

Nick Flynn, author of Some Ether

Donald Breckenridge is the author of more than a dozen plays as well as the novella Rockaway Wherein (1998, Red Dust). His work has also

appeared in the Pierogi Press and the Brooklyn Rail. He lives in Brooklyn, New York and is at work on a second novel.