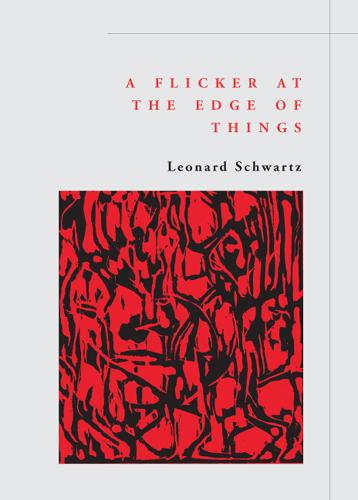 A Flicker at the Edge of Things

Essays Towards a Poetics

Robert Duncan’s emphasis, that ‘responsibility is the ability to respond,is honored with a consistent clarity.

As in his poetry, Leonard Schwartz’s criticism manages to bring body and sensibility to the forefront as that ultimate frontier against which all great intellectual adventures must test themselves.

The nature of the SOUL is fully revealed in our time. Though Schwartz may modestly veil it in terms like “transcendental lyric” make no mistake: this is raw soul brought up from the deep and placed virtuously on our plates.  All those who are hungry may eat.

Leonard Schwartz is an internationally known and widely celebrated poet from New York. Aside from the beautiful imagery of his work and his interest in working with poetry from different languages, Schwartz is well-known as the host of the radio program Cross-Cultural Poetics which is also available online at the archives of Pennsound.

His books include A Message Back And Other Furors (Chax Press), Language As Responsibility (Tinfish Editions), The Library Of Seven Readings (Ugly Duckling Presse) and The Tower Of Diverse Shores (Talisman House).

He has received fellowships and grants from, among others, The National Endowment for the Arts, The New York State Council of the Arts, and Arts Link. His poems have appeared in many journals and publications, including Harper's, Conjunctions, The Denver Quarterly, and Verse.

He is currently Professor of Literary Arts at The Evergreen State College.