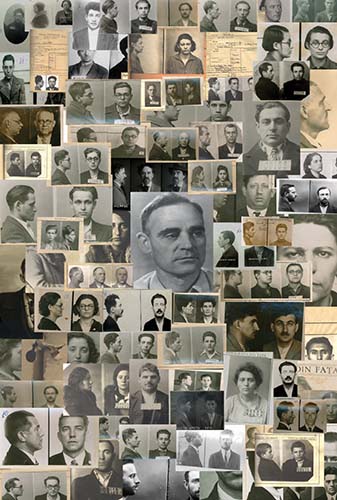 Most of Tanase's Auntie Varvara's Clients deals with the subversive and self organizational work of the Komintern agents in Romania, with the tribulations of the small, illegal and hardly popular Communist Party from Romania, and with the mafia-like pragmatics of these clandestinos. When the Red Army entered Romania in August 1944, there were fewer than 2,000 Communist Party members and sympathizers in the country and abroad. Not that opportunism is manifest only in that country but, by 1947, the party membership had risen to some 700,000.  "We were so few. So many of us are left," ran an adagio. This party that never came to be a grassroots movement, showed awkwardly disguised shudders of illegitimacy until its disbanding in 1989. As a proletarian dictatorship, the Romanian communist regime, which came to power through epic electoral fraud, proved that everything proletarian in it was absorbed by its dictatorial side.

Stelian Tanase, author, journalist, political analyst, academic, and TV personality, was born in Bucharest in 1952. He studied philosophy at the University of Bucharest and defended a doctoral thesis in Political Sociology. He currently teaches political science at the University of Bucharest, has his own political talk show with Realitatea TV, is the editor-in-chief of Sfera Politicii, and has been a very popular author of novels and political essays. Tanase was a Fellow Scholar at the Wilson Centre in 1994 and a visiting professor at UCLA in 1997 on a Fulbright scholarship. He has been co-president of the Romanian Journalists’ Association since 1990 and vicepresident of the Romanian Political Science Association since 1994. He has lectured on political topics in Italy, Norway, Hungary, Austria, and the U.S.A.Stelian Tanase’s ﬁrst novel, The Luxury of Melancholy, came out in 1982. From 1983 until 1989, the communist regime banned the publication of any of his texts. After the fall of the Romanian communist regime in December 1989, he published, among other titles, Şocuri şi crize (Shocks and Crises), Staﬀ , Bucharest, 1993, Ora oﬁ cială de iarnă. Journal 1986-1990 (The Official Winter Time. Diary: 1986-1990), Institutul European, Iaşi, 1995, Playback, Editura Fundaţiei Culturale Române, Bucharest, 1995, Revoluţia ca eşec. Elite & societate (Revolution as Failure. Elites & Society), Polirom, Iaşi, 1996, Anatomia mistiﬁ cării (Anatomy of Mystiﬁ cation), Humanitas, Bucharest, 1997, LA vs. NY. Jurnal american (LA vs. NY.  American Diary), Polirom, Iaşi, 1998, Elite şi societate. Guvernarea Gheorghiu-Dej (Elite and Society. The Gheorghiu-Dej Administration), Humanitas, Bucharest, 1998, Miracolul revoluţiei (The Miracle of the Revolution), Humanitas, Bucharest, 1999, Acasă se vorbeşte în şoaptă (At Home We Speak in Whispers), Compania, Bucharest, 2001, Clienţii lu’ tanti Varvara (Aunt Varvara’s Clients), Humanitas, Bucharest, 2004. Aunt Varvara’s Clients received the 2005 Best Book Award from the Cuvantul literary magazine.