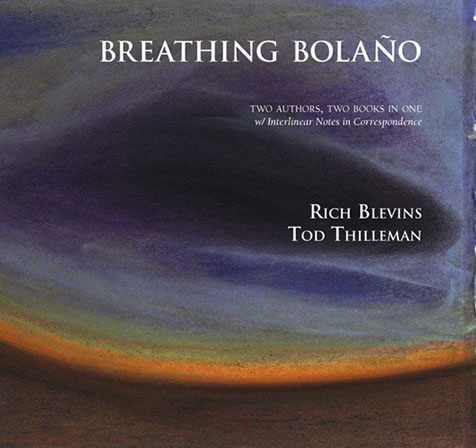 Two Books in One:

Breathing by TT & from Corrido of Bolaño by RB

Tod Thilleman moved to New York at the age of 18 and worked for a brief period with Pace Editions. Shortly thereafter he moved to Greenpoint, Brooklyn and began attending, on a regular basis, Matthew Courtney's poetry readings on Sunday nights at ABC NO RIO on the Lower East Side of Manhattan. It wasn't until Thilleman mentioned ABC NO RIO to Blevins, and Rich then quickly responding that he, too, read in that same neighborhood, Rivington Street, at exactly the same time-frame (1985-1987), that he began to reminisce in a slightly Bolañoesque fashion about the times spent with derelicts and poets. This was discovered mid-way thru their discussions on Bolaño. Thilleman is the author of numerous poetry collections and the novel Gowanus Canal, Hans Knudsen. From 1991-1999 he was an editor at Poetry New York: a journal of poetry & translation, for which he's still catching hell.