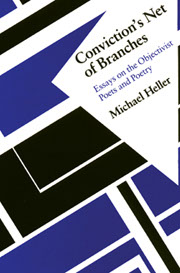 The first book devoted to the work of the Objectivist Poets: Louis Zukofsky, George Oppen, Charles Reznikoff, Carl Rakosi, Lorine Niedecker. Though not a historical study, Heller explores the modernist roots of the Objectivist tradition and illuminates the meaning and importance of these poets not only for writers and scholars but for poetry itself as significant knowledge of our world.

...a questing intelligence, forever on the trail of the epistemological, the 'flimsy beatitudes of order.

He's somewhat a latter-day Jewish Yeats, full of terror and joy, trying to make some sense of the chaotic destructiveness of the 20th century in lyric poetry. It is an heroic if impossible task.

...ideas juxtaposed with imagery of earth and sea, and nature becomes a symbol of human drama--passionate, unbridled.

...a singular address to unknowingness.

Michael Heller's libretto for the opera Benjamin, based on the life of the German-Jewish philosopher Walter Benjamin, has been performed at the Philadelphia Fringe Festival. He has been a member of the faculty of NYU's American Language Institute since 1967 and has taught at The Naropa Institute, The New School, San Francisco State, Notre Dame and other universities. His many awards include a New York State CAPS Fellowship, the Alice Fay Di Castagnola Prize of the Poetry Society of America, a National Endowment for the Humanities grant.