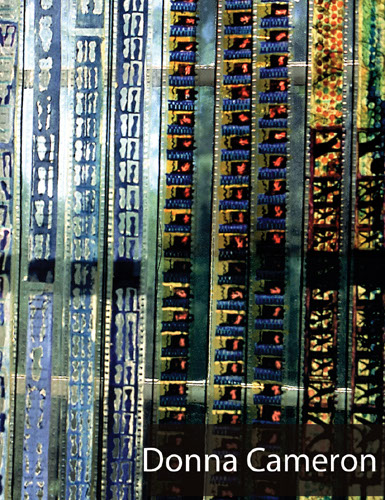 Donna, here, has invented her own film stock. This is the kind of thing that needs to be appreciated for what it is. When you can’t afford Kodak’s inflated prices, what could be more obnoxious than coming up with your own film stock? We should all come up with our own film stock and show Kodak a competitive market soon.

For the past (30) years Cameron has been working in paper emulsion...The result is a series of vibrant sensual films reprocessing such familiar imagery as the Brooklyn Bridge or paper money...

Not having the resources to make films didn’t stop Donna Cameron—she just invented a new way of doing them.

Donna Cameron is one of the most significant new presences in non-narrative cinema, in cameraless cinema, in New York Independent cinema, in American avante-garde cinema, and in poetic meditative cinema. We are mightily enthusiastic about the extraordinary work of Donna Cameron, filmmaker.

Donna Cameron, inspired by the early avant-garde animation films of Len Lye, Oskar Fischinger and Norman McLaren, has renewed and revitalized the technique of cameraless animation. She has brilliantly developed an utterly original way of making films through a technique she has pioneered, “cinematic paper emulsion.” Using this technique she has made among others Fauve, Autumn Leaves, The Clown providing a heady and thrilling viewing experience. She also makes moving and unconventional documentaries such as Shirley Clarke in Our Time, on the filmmaker Shirley Clarke, and Confidential, Do Not Duplicate on the tragic death of her sister. Donna Cameron is indeed a major figure in American avant-garde film.

Donna Cameron is the author of an extensive body of work which includes oil paintings, watercolors, photos, films, videos and CD-ROMs, and has been an exhibiting visual artist since 1970. Her paper emulsion films have been collected by the Museum of Modern Art,  NY Dept. of Film & Media (1990-CURRENT). Her current installation work explores the relationship of the traditional image to the digital frame, and the function of an image within the framework of inter-media. She has been an educator since 1969, and has taught and lectured at NYU (1992-CURRENT) and the School of Visual Arts, NY (1998-2000).

Donna Cameron is the recipient of many scholarships and is internationally educated. She began her studies at The Rhode Island School of Design in painting and drawing in the early 1970s, branching out at RISD to animation and video. With a full scholarship she completed her BFA at the School of the Art Institute of Chicago in 1980, with a focus in photography and film and a minor focus in life drawing. Rather than pursue a traditional MFA in the programs at which she was accepted at the Masters level, Cameron opted to design her own course of inter-disciplinary study, in order that she might develop her invention, the Cinematic Paper Emulsion. This included years of full time study of landscape painting in Paris, France in the early 1980s at Atelier Herbo, the private studio school of the late post-impressionist master Ferdinand Herbo, who at that time was noted as chief marine landscape painter of France; the Art Students League of New York, 1984-86, where she was twice the recipient of the Jose de Creeft Memorial award for painting; at the Sorbonne (French, Art History); video at The American Center, Paris; photography at the International Center of Photography (NY).

In 1997 Cameron was nominated to NYU's University Council of Arts Educators. She is an exhibiting member of the Federation of Modern Sculptors and Painters of New York. For seven years, she has served on the Board of the New York Film & Video Council.

Donna Cameron lives and works in Brooklyn, New York. Many of her images are inspired by New York City’s urban pulse: its people, buildings, rivers, bridges, and by the Hudson River School inspired landscape of Brooklyn's Prospect Park.