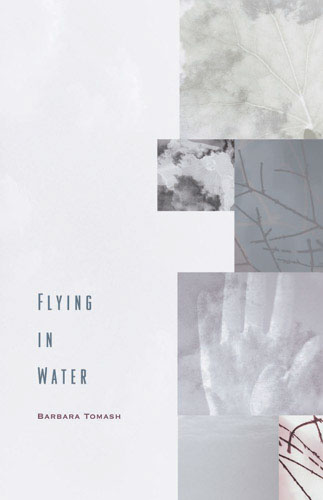 In Barbara Tomash’s beautifully latticed prose poem series, Flying in Water, the reader is treated to the inner workings of a writer thinking about what it means to be a woman in language. One is reminded of Virginia Woolf’s The Waves, in which the dazzling thoughts of ﬁctive narrators push language closer to truth. The “she” of Tomash’s suite of poems is alert to all the clarity of living and its complex shadows. These poems are gem-like, using “her voice’s cool sleeve,” “the perfect tool to hammer white open.” And in all of the poems there is also the weight of eternity, of worlds continuing after this particular voice has ended.

This extended and arresting interior portrait moves from the world to self-awareness to language-awareness with liquid ease: “the drawing of a leaf to look like a leaf // She is drawn to abstraction. She makes her mark. It is shaped like a leaf that looks like the face of an owl. If language were an arrow and the material world the target, she would never hit. She takes aim at the leaf.” With her sequence of meditative prose vignettes, Barbara Tomash takes aim and makes her mark. Flying in Water is wonderful poetry.

Flying in Water is an exemplary book. Here, there is no ﬁrm line of demarcation between language and consciousness, or between either and “the facts of life” that elude both. This book is an act of attention to writing, very much like Harry Mathews’s 20 Lines a Day or George Albon’s Brief Capital of Disturbances. Each piece remains entirely within its moment and occasion, and precisely for that reason, the pieces make a stunning whole—the autobiography of a consciousness. George Oppen’s words appear in these poems, as does his attention to words, to things, to life. “If she didn’t have words, what did she have?” “Her limit begins—ringing her.”

She worked extensively as a multimedia artist before her creative interests

turned her toward writing. In 1998,she received her M.F.A. in Creative Writing

from San Francisco State University, where she now teaches. Her poetry has

Review, and ZYZZYVA. An earlier version of Flying in Water was a finalist for

Book Prize and the Nightboat Poetry Prize. She lives in Berkeley, California

with her husband and son.