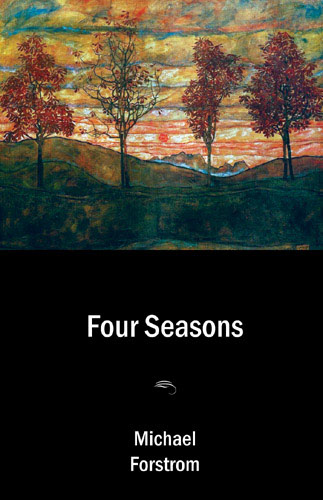 A kind of calculation of loss, Michael Forstrom’s lines are rigorously plain, compressed by discretion rather than withholding; that is, he’s choosing what not to say, and the cesurae speak volumes. An impressively controlled and deliberate sequence of views—life taken apart by time—patient, taut, elliptical.

When I first read Michael Forstrom’s Four Seasons, it was just Winter, a cancer tale—an empty swing, the arc of a combative ghost. I wanted to offer an ebony bell—a carved ibis with a low, subtle tone to appease the late poverella. Immersed now in the full cycle of this love story, the passing seems reconciled, almost peaceful. Forstrom’s calm clarity ushers readers through a body’s complex desire:  red lips wanting to be painted (spring), naked calf in a flustered undressing (summer), a dying mouth repeating what the children say (autumn). This novella’s pacing mesmerizes. The betrayed widower, as caregiver, is in control but not controlling; he is an enduring witness, offering just enough. Elegant justice. Four Seasons is a sanctuary, a carillon carved from stone by hand.

Michael Forstrom was born in Sweden and raised in England and Canada before the family settled outside Minneapolis, MN. As an adult, he has lived in various places in the U.S., as well as in England and Kenya, and earned degrees from Carleton College, The New School for Social Research, and SUNY Buffalo. For the last ten years, he has lived outside New Haven, CT and worked at the Beinecke Rare Book & Manuscript Library at Yale. He has published film reviews, short fiction, and poetry, including two pamphlets, the elusive object (Phylum Press) and The Icon Painter. In 2012, he held residencies at VSC and Millay Colony where he completed a mixed-genre piece and embarked on a new work exploring the effects of dispersal, illness, and telecommunications on the contemporary family. Four Seasons is his first novella. He lives with his wife, poet Katie Yates, and children.