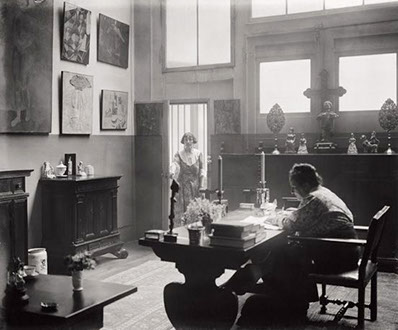 While living in Paris, Gertrude Stein began submitting her writing for publication. Her earliest writings were mainly retellings of her college experiences. Her first critically acclaimed publication was Three Lives. In 1911, Mildred Aldrich introduced Stein to Mabel Dodge Luhan and they began a short-lived but fruitful friendship during which the wealthy Mabel Dodge promoted Gertrude's legend in the United States. Mabel was enthusiastic about Stein's sprawling publication The Makings of Americans and, at a time when Stein had much difficulty selling her writing to publishers, privately published 300 copies of Portrait of Mabel Dodge at Villa Curonia. Dodge was also involved in the publicity and planning of the 69th Regiment Armory Show in 1913, "the first avant-garde art exhibition in America". Stein and Carl Van Vechten, the noted critic and photographer, became acquainted in Paris in 1913. The two became lifelong friends. Van Vechten served as an enthusiastic champion of Stein's literary work in the United States, in effect becoming her American agent.