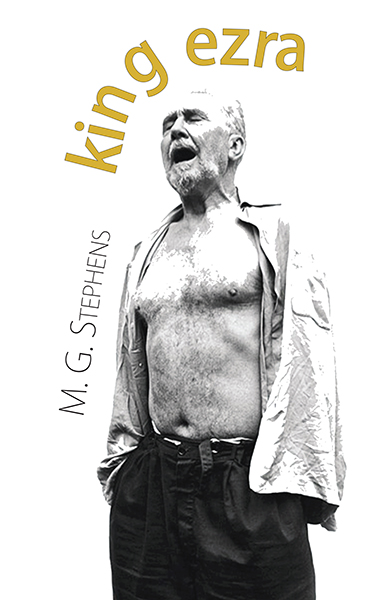 M. G. Stephens has written a novel about one of the most controversial figures of the Modernist movement—Ezra Pound. During the Second World War, Ezra Pound worked as a propagandist for the Italian Fascists, helping their cause with his regular broadcasts over the radio. This activity led to Pound’s being charged with treason, though he would never be put on trial for it. Instead, he was committed to a hospital in Washington, D.C. for the criminally insane for more than a decade. King Ezra takes the reader from Ezra Pound’s incarceration by the U. S. military after World War II, up to his final days in Venice in the early 1970s. M. G. Stephens draws upon his literary reserves as a poet, fiction writer, and playwright to tell this tragic story of a flawed genius.

Michael Gregory Stephens is a brilliant writer, with a great imagination and heart. And his prose is downright gorgeous.

Hilma Wolitzer, author of Today a Woman Went Mad in the Supermarket

I read the novel nearly straight through at one sitting to about page 250-something and then did what I've done only a few times in my life with a few books you and I could probably both name and instead rationed myself to a chapter at a time, not wanting it to end, but then it did. Now, There. In the Beinecke the bronze light sifting through the skim/skin of sheer soft marble. Goddamn I loved this novel, a true history of modern poetics in Olson's sense of 'istorin, a bardic Brooklyn Íslendingasaga via DC, Bed Stuy, and environs.

Michael Joyce, author of Foucault, in the Winter, in the Linnaeus Garden and author of the first hypertext fiction, afternoon, a story

Living as we all do—who might be reading this comment—in the era of pound—it is a great pleasure to relive in the vivid subjective prose of Michael Stephens, a telling in King Ezra both a life of Ezra Pound and of the ferocious impact of the life and the work of Ezra Pound all made new as it should be and is...

Stephens’ prose can be quick, idiomatic or inward looking and contemplative, but it is everywhere vivid, engaging and surprising.

Michael Stephens’ range is astonishing; his sentences are elegantly crafted from the heart and the imagination.

Here is what readers are saying

History of Theatre or the Glass of Fashion

I love the way this gorgeous meditation veers with daring and grace between poetry and prose, between art and life.

M.G. Stephens’ History of Theatre or the Glass of Fashion is the seasoned work of a pure poet and fiction writer, a marriage of the concise and lyrical, suffused with both moments of keenly observed humanity and flights of luminous rumination.

—Richard Price, author of The Wanderers and Lush Life

The whole is funny, grave and grand. Simply terrific.

—George Szirtes, author of Reel and

The Burning of the Books 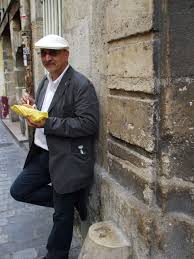 M. G. Stephens has published 25 books, including the novels Season at Coole and The Brooklyn Book of the Dead. Two thousand-twenty-two is the 50th anniversary of the publication of Season at Coole by E. P. Dutton. Last year (2021), MadHat Press published his hybrid work of prose and poetry about an out of work actor who lands the part of Hamlet, and is entitled History of Theatre or the Glass of Fashion; it has been praised by novelists such as Hilma Wolitzer and Richard Price, as well as poets such as George Szirtes and Michael Anania. His nonfiction books include the travel memoir Lost in Seoul (Random House, 1990) and the essay collection Green Dreams, which won the AWP award in nonfiction, and was later picked by Joyce Carol Oates as one of the 100 most important American nonfiction books of the 20th century. His play Our Father ran on Theatre Row (42nd Street in New York) for over five years, and has had multiple productions in London, Chicago and Los Angeles. In 2001, Stephens moved abroad to London, where he lived for fifteen years. During that time he was active in London stages, and had plays produced by Pentameters Theatre in North London (Hampstead) and the Bread & Roses Theatre in South London (Clapham). He earned all his degrees after he was thirty years old, including a doctorate from the University of Essex in Colchester, England that he was awarded at the age of 60.  Before moving abroad, Stephens taught creative writing workshops at Princeton, New York and Columbia universities; in London, he taught at the University of London (Queen Mary). Along with his novel King Ezra, Spuyten Duyvil recently published Stephens’ third Coole family novel, Kid Coole, about a young, up-and-coming lightweight boxer out of the Hudson Valley in New York. Season at Coole, The Brooklyn Book of the Dead and Kid Coole comprise The Coole Trilogy.