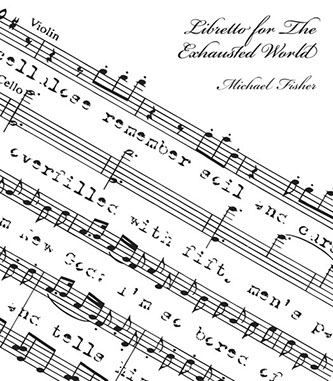 Libretto for the Exhausted World

In The Exhausted World, Michael Fisher manages to capture and render the sounds, sights, and feelings of modern life. But unlike so many contemporary poets, Fisher’s formal playfulness—his nervy, kaleidoscopic music—seems always to derive from real feeling, from the depth of emotion in his protagonist (Ψ) and in his own sensibility. Libretto for The Exhausted World is an invigorating book—and a cause for gratitude.

In his “little book” Michael Fisher poses the big questions that concern everyone who loves art and music and literature. Through his “trinity” of Narrator/ψ/New God, we see the struggle to keep poetry (and the self) alive, to make it matter in a world driven by fears both personal and universal. In the exhausted world, “the reader of poetry is evil and must be destroyed” and New God chastises the poet for attempting to find meaning in everything. But ψ is ready to play the bad guy, to see poems in beer commercials, to “scribble strophes in a black moleskin.” We are fortunate Fisher too is driven to keep playing the “villain,” to see a “spark” in something as small as a grain of sugar in a book binding. 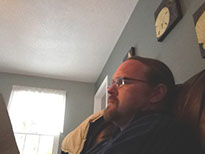 Michael Fisher holds an MFA in Poetry from New England College. His work has appeared in several places online and in print. His first collection “The Wolf Spider” was published by Plan B Press in 2010. Currently, he works as an adjunct professor in Worcester, MA.