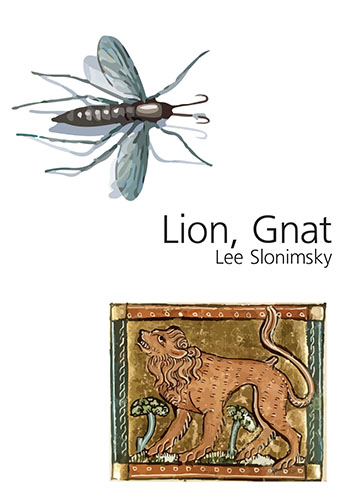 With gentle humor and passionate meditation, Lion, Gnat, Lee Slonimsky’s latest poetry collection, soars above the clamor of modern life and “steel against indifference”. These poems argue vigorously that not only is nature man’s origin, but also his destiny. Like the winter oak, nature sheds light on life’s enduring lessons and shows the path forward. Luminous, deeply felt, Lion, Gnat once again establishes Slonimsky’s singular voice in contemporary poetry.

Lee Slonimsky has long been master of the sonnet, as both nature poem and persona poem, often in the voice of the ancient Greek philosopher Pythagoras, in love with the pure order of the cosmos. In “Geometry in Paradise,” Slonimsky finds “math’s everywhere,” and in the title poem, “Lion, Gnat,” he observes “the lust of molecules to rearrange / themselves quite differently: as lion, gnat.” In this collection, he extends his range, exploring other forms such as triolet, haiku, and free verse, while turning his piercing intelligence inward on the conundrum of romantic love. What is love, marital and extra-marital, current and passed? He brings us face to face with this enigma with startling clarity. Finally, this is a book about love, pervading the micro- to the macro-cosm: in “Electrons Love to Dance,” Slonimsky sees how electrons “romance / their protons while they whirl.”

Barbara Ungar, author of Charlotte Brontë, You Ruined My Life and Immortal Medusa

I’m convinced that though he respects the lion, it’s the gnat-like things of the world that most often fuel Lee Slonimsky’s admiration. And in Lion, Gnat, he shows us the riches to be found in ants (“each one a President/ of his or her own life”), the talons of birds, tree bark, dust and the varied life of electrons, even how they love to dance. The human animal too gets its say: couples who learn to achieve something like bliss (his take on Ghent will fire the romantic in you), a stockbroker who turns a bit into a Thoreau as he watches the flight of birds, a poet’s meditation on poetry and the joy of teaching—while the mysterious Weldon Kees rises from the windswept ocean. The last section of the book celebrates Pythagoras, the mathematician Slonimsky has turned into one of the great characters of poetry, enlightening us all again with the Greek who’s at once young and old, timeless. In the title poem of the collection, Slonimsky offers “Complexity determines everything”—yes, but it’s his poetry that reminds us of the simplicity we often overlook in our often busy lives that makes the complex a concern to us. Lion, Gnat and Lee Slonimsky—listen hard (as he might put it), the Universe is being written.

Tim Suermondt, author of Election Night And The Five Satins 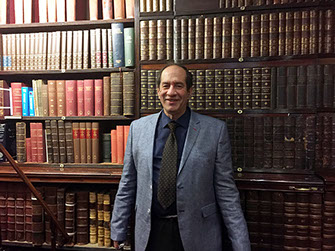 Lee Slonimsky has published eight books of poetry, a chapbook, and a collaborative chapbook with Katherine Hastings. Partnering with his wife, Hammett Prize winning novelist Carol Goodman, he has co-written the Black Swan Rising trilogy of urban fantasy novels, and he has also written a hedge fund mystery novel under his own name, Bermuda Gold. Finally, reflecting both his own deep love of animals and his interest in the vegetarian historical figure Pythagoras, he has recently started a humane investing “side pocket” to his hedge fund Ocean Partners LP, which is called Green Hills Partners LP.