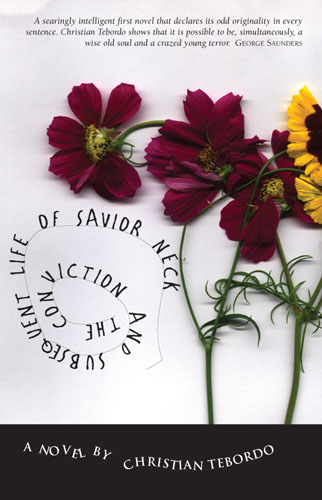 A philosophical fantasy? A noirish mystery? A slick postmodern trick? I settled on a fairy tale—if the Grimm brothers had written one about a dirty, stinky old drunk. Savior Neck reads like something penned by the love child of Samuel Beckett and Dorothy parker.

TeBordo's novel works because every cruel trick the narrator plays is eventually turned back upon him. The joke—awful and sometimes hard to laugh at—is on everyone. What makes it possible to take is a dedication to linguistic play that draws its inspiration as much from Kafka as it does from vaudevillian tomfoolery: "As Savior Neck awoke the next morning from the same dream he found himself transformed in his bed into a human being of average size." Repetitions abound, literary allusions land like anvils on the sidewalk, and a passionate denial of the possibility of momentum (the first and last sections of the novel proper are both entitled "Point A') itself becomes a kind of momentum, a pair of feet pedaling wildly over the abyss. The novel's unyielding humor and lunatic logic make the inevitable fall well worth taking.

Now, nobody really wants to hang around a dead guy, as witnessed by the awful reactions people have to his offensive odor, apparently one of the reasons that when we're flash-forwarded into the future, Mr. Neck is a stumblebum drunk who lives above one of Discord's lower-end drinking establishments, the same one inhabited

most days by his unloving father.

The novel walks an unsteady line between fantasy and reality, while also veering erratically in perspective from first to second to third person. Like Carter Scholz or George Saunders, TeBordo mines absurdist territory...

A searingly intelligent first novel that declares its odd originality in every sentence. Christian Tebordo shows that it is possible to be, simultaneously, a wise old soul and a crazed young terror.

For existentialism, death is the insurmountable condition that gives life both its meaning and its finitude. TeBordo's fiction, on the other hand, offers us a book that begins with a man who is fully conscious of the fact he is dead but who continues to live on anyway, surrounded by a cast of types that seem like refugees from the grittiest, funniest Coen Brothers movies. The Conviction & Subsequent Life of Savior Neck is about the absurdity of both existence and non-existence; it is an exploration of responsibility, ethics, and aesthetics that is at once funny and frightening. This is a smart and surprising first novel.

Christian TeBordo's novel is relentlessly astonishing. It's absurd without being grotesque. It's funny without being silly. It's original without being pretentious—so original that it's hard for me to describe the level of reality at which it operates except as that of its own absorbingly nutty invention. The book is, I should add, absolutely and compulsively readable.

Christian TeBordo was born in Albany, New York. He earned a BA from Bard College and an MFA from Syracuse University where he was a fellow in creative writing. His fiction has appeared in 3rd Bed, Reinventing the World and 9th Letter. He and his wife Kathryn, a choreographer, live in Philadelphia.