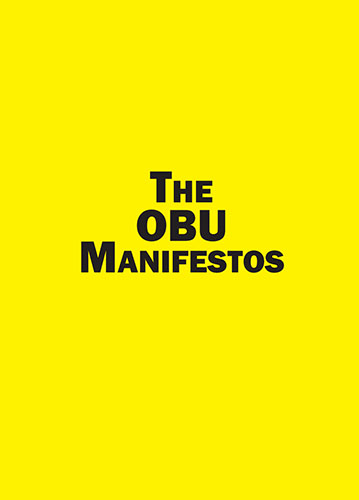 One Big Union aka Oligarchy Busters United--a serious and radical hoot, a real send-up and a real, passionate intervention--these Blakean manifestos for our pluri-poly-inter-problemantic NOW-TIMES smash and reconfigure the relations between politics (explicit), situationist aspiration (informed), aesthetics (pointed), and aspire to a metamorphic (dada?) democracy—all with a fierce and witty love. Ingest the transformative OBU; readiness is all.

I embrace the OBU Manifestos! They imagine a movement that actually moves, and a union that unites. Read these thought experiments not just for the smart allusions to Blake and Conrad, not just for the adrenaline jolt of possibility, but also for the toe-tapping sense of fun that is vitally serious: the belief that our country, and our world, and we ourselves, can all be better. That there is something better than Trump, better than money; that forms of solidarity can be imagined that will help us fight our way out of this political chasm...that there may be something even better than happiness, that will still include happiness, and that the world can still be saved.”

and opinion columnist for The Los Angeles Times