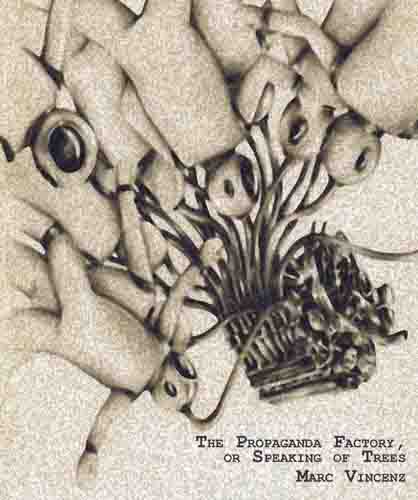 The Propaganda Factory by Marc Vincenz

or Speaking of Trees

The sun bottoms out

and they rise again,

When our backs are turned

they go straight for the warm blood,

in our carbon dioxide,

Joseph says their magic is in the feathers,

he calls them quills that ink the skies.

I say, strange they bleed cold.

he with the bow and arrow,

he with the eyes

in the back of his head,

he with the illusion of time.

Marc Vincenz is Swiss-British and was born in Hong Kong. His most recent books include The Propaganda Factory, or Speaking of Trees (Argotist, 2011) and Pull of the Gravitons (Right Hand Pointing, 2012). His translation of Swiss poet Erika Burkart's collection, Secret Letter, is forthcoming from Cervena Barva Press (2013). He currently lives in Iceland where he works as a journalist, poet, translator, editor and book designer. Recent and forthcoming publications include Guernica, Exquisite Corpse, The Potomac, Spillway Review, Poetry Salzburg Review, elimae, MiPOesias and Stirring. He is presently working on a verse novel, Leaving Wolf Mountain, and translating the works of Werner Lutz, Ernst Halter and Jon Kalmann Stefansson. Marc is Editor-in-Chief of MadHat Press and Mad Hatters' Review. In 2011, he was nominated four times for the Pushcart Prize.