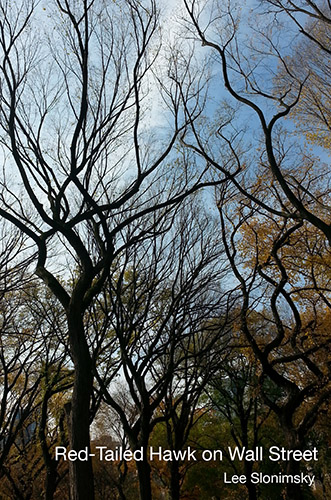 Once again in Red-Tailed Hawk on Wall Street Lee Slonimsky shows himself to be a scientist-poet, a mathematician-poet, a conjurer poet.  Slonimsky’s is a unique and generous vision that teaches us how to experience the natural world in its stunning originality as if for the first time. The poet’s sense of being at one with nature is powerful because it is both metaphoric and literal. Just as the poet envisions a transmigration of souls, the poems transmigrate from the present to something eternal. This is a book of great range: in form (some sonnets, some not), in content (there are love poems, persona poems, humorous poems, solemn ones), but all ““glide through early mists.” For there is an honest and lovely optimism that leaves the reader refreshed: as Slonimsky wisely says in “Pythagoras Looks Ahead,” “…transmigration is the greatest gift/that atoms in their weavery allow. No time to mourn each phase that he has left:/each new form’s all the world that he can know.” Slonimsky’s is a vision of the world that should not be missed.

In these sonnets and alter sonnets Lee Slonimsky weaves a unified field where the Red-tailed hawk in Manhattan and the stock trader in the Catskills thrive. From ferns to stars, atoms to galaxies, mystical mathematics to dragonflies, we are reminded that The wind may soon be your identity./ It rustles leaves, then stills; a night bird flutes/ and empty seems the new geometry. Always witness to an underlying order in all things, within the signature of all things, Slonimsky’s poems trace the lineaments, the outlines of that order which can never be fully disclosed because it is infinite, but can be gleaned through poetry. His hawks soaring and circling above Wall Street are more than metaphor, but a truth that nature is always poised to reclaim us as her own. This insight becomes reconfigured in these lively, re-invented sonnets and poems fresh and vibrant with the poet’s embrace of intuitions ancient and daily.

Lee Slonimsky’s Red-Tailed Hawk on Wall Street is a triangle of poetry with Wall Street, Nature, and Pythagoras as the three sides. His muse is the red-tailed hawk, who flies over city and field—sometimes as predator, other times as observer. Slonimsky’s skillful sonnets include a delightful one in which different trees boast particular dialects. There are fine romantic poems set in Italy and France, and everywhere this most unusual stock trader reveals his poetic soul. 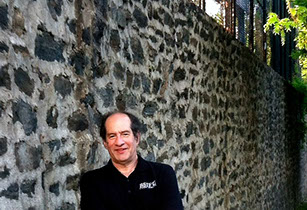 Lee Slonimsky is the author of five previous poetry collections, Talk Between Leaf and Skin and Money and Light from SRLR Press, Pythagoras in Love and Logician of the Wind from Orchises Press, and Wandering Electron from Spuyten Duyvil Press.  Pythagoras in Love/ Pythagore, Amoureux will be published in 2015 in a French/English bilingual edition from Folded Word Press, with Lee’s poems translated by Elizabeth J. Coleman. Chapbooks include Ghost Along the Hudson from Carter and Company Press and Slow Shadow/White Delirium, co-authored with Katherine Hastings, from Word Temple Press. Individual poems have appeared in such places as Best of Asheville Poetry Review, The Carolina Quarterly “Emerging American Poets” issue, Measure, The New York Times, and Poetry Daily, and have been nominated seven times for the Pushcart Prize.

As Lee Carroll, a pseudonym he shares with his wife, Hammett Prize winning author Carol Goodman, he has co-written three urban fantasy novels: Black Swan Rising, The Watchtower, and The Shape Stealer. He is the author of a detective novel from Moonshine Cove Publishing, Bermuda Gold. Lee is the manager of a hedge fund with an interest in socially responsible investing, Ocean Partners LP, and conducts a monthly poetry writing workshop in New York City, Walking with the Sonnet.