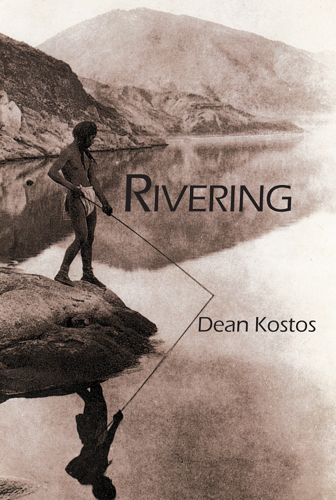 Nearly every line can be quoted as an example of linguistic beauty ranging through the tools of internal rhyme, assonance and consonance to subtler resonances.

Very few of these poems come to us with the demands of a determined art; rather, as in the first poems of Cavafy, the grace of Dean Kostos’s texts (I would call it unconscious grace, for that is the adjective which permits all heaven as much as all hell to explode, to let fly) is the result of another effort, not even the effort to please, but merely—merely!—the will to tell the truth, to tell what happened, what didn’t … It is another version of art to which the poet trusts himself, call it the grace of nature which invites the reader to return, to read again until he has made the poem an

experience of his own. That is what happens here, the reader returns until he owns the poems. Or do the poems own him?

To his own medium, poetry, Dean Kostos applies his art teacher’s advice: “... draw in the mystery, press down harder - / let darkness draw all the elements together.” An impassioned observer who sees beneath the surface to subterranean rivers, Kostos is attentive to the confluence of dark forces. Yet his richly rendered poems also offer burnished and evocative depictions of our world as encapsulated in art. Both in its themes and in the controlled lushness of its style, Rivering presents a feast of figuration.

Rachel Hadas, author of The Ache of Appetite

Like latter-day sarcophagi, Dean Kostos’s keenly musical poems do justice to absent spirits and fugitive intuitions. In each line’s precise intonation, and in each stanza’s decisive shape, I hear the poet’s entranced attentiveness to the weight and luminousness of syllable. Kostos displays a laudable plurality of influences and inspirations; reading this artfully constructed book, I happily identified with his

hunger for the mutable, the emblematic, the unattainable.

This is a book to be savored; each poem is a complete experience. Kostos’s work is fully formed, gorgeous, velvet and shattered glass, a kind of hymn to the universe. He traverses from the personal to the religious, to Ekphrasis, to the myths of the Greeks, Hindus, Egyptians, Romans, to his own myths and demons. An almost terrifying onslaught of language (his verbs are amazing), in carefully controlled forms. Rivering is a feat of language and beauty, keen psychological insight, great craft, and a dizzying complex of ideas and feelings.”

Dean Kostos is the author of four poetry collections, as well as the editor of Pomegranate Seeds: An Anthology of Greek-American Poetry (the debut reading of which was held at the UN) and the co-editor of Mama’s Boy: Gay Men Write about Their Mothers (a Lambda Book Award Finalist). His poems, personal essays, and translations have appeared in over 250 leading periodicals and anthologies, including Boulevard, Western Humanities Review, Southwest Review, Stand Magazine (UK), Talisman, and on Oprah Winfrey’s Web site Oxygen.com. Kostos wrote the libretto Dialogue: Angel of Peace, Angel of War, set to music by James Bassi and performed by Voices of Ascension. Kostos’s play Box-Triptych was performed at La Mama ETC. His literary criticism has appeared on the Harvard University Press Web site, in American Book Review, and elsewhere. An editor for Journal of the Hellenic Diaspora, he coordinated a Greek poetry event for the Rockefeller Foundation. A presenter at the Columbia Scholastic Press Association, he has also served as literary judge for Columbia University’s Gold Crown and Gold Circle Awards. He has taught at Wesleyan, the Gallatin School of NYU, Teachers & Writers Collaborative, and Gotham Writers’ Workshop. He is currently on the faculty of The City University of New York and Berkeley College. Trained initially as a visual artist, his works have been exhibited in galleries and at the Brooklyn Museum.