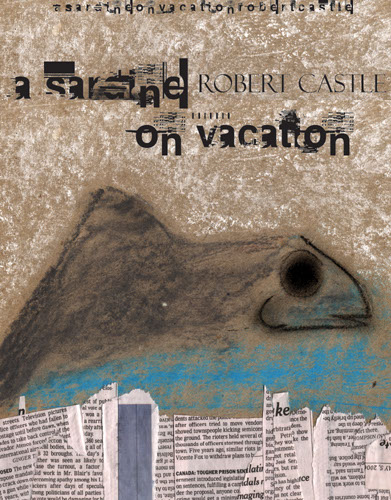 A Sardine on Vacation

A non-book in 53 columns

A Sardine on Vacation collects 53 short essays, stories, dialogues, character sketches, and miscellaneous musings. Inspired by Flann O’Brien’s Myles columns in the Dublin Times, the Sardine scornfully confronts and avoids the Newspaper-Reading Public who cannot quite figure out what the Sardine represents. Ultimately, the Sardine’s success leads one man to take it up on himself to hunt down and unmask the Sardine.

Odd Pursuits (Wild Child Press) can be praised on many levels, but in writing, there are two things, when all is said and done, that ultimately matter—what one has to say, and how well one can say it. Robert Castle fulfills on both counts.

A Sardine on Vacation does for the newspaper-column novel what Gutenberg did for the hand-copied Bible, that is, it completely redeploys, redirects, and redistributes the energies of a genre pegged so closely to the myth of old-time objectivity.  The William S. Burroughs-inspired three-column format retrains the novel reader’s eye—until the line between faux-journalism and recursive postmodern narrative excurses makes the Jason Blair and Stephen Glass scandals seem like the work of rank amateurs. Open this tin, and take a trip with the Sardine!

Robert Castle teaches American History, Film Criticism, and Sociology at a small academy outside Trenton, NJ. He studied English and got a degree in the Writing Program at Penn State in the early seventies. After attending Columbia University School of the Arts for a brief time, he traveled around Europe and lived on and off in Florence, Italy. For fifteen years he lived off his earnings as a cook at a New Jersey seaside town before finally giving up and getting a full-time job, teaching being the least objectionable profession to pursue. He is married and has no children.

Bob has regularly published articles for Bright Lights Film Journal since 2000,writing about Stanley Kubrick, the Coen Brothers, James Bond, Fellini, Roger Rabbit, Orson Welles, Disturbing Movies, and GoodFellas. Other of his film essayshave appeared in Film Comment (on Full Metal Jacket), The Film Journal (Sam Peckinpah), The Journal of Religion and Film (Eyes Wide Shut), Talking Pictures,24 Frames Per Second (Paths of Glory), Cinetext (Being There & The King of Comedy), and Metaphilm (Stone's JFK). He has other regular gigs at Unlikely Stories for theInternet version of the Sardine and at The Circle Magazine with a quarterly column called "Half-Baked Ideas." He has also written two essays about teaching History forArchipelago, has several articles about his travels in Europe at The Paumanok Review, and has three literary pieces (on Cortazar, Queneau, Gombrowicz, Perec, Flann O'Brien,Stoppard, and other of his literary gods) at elimae. His fiction can be found at many places online: Fiction Funhouse, Fiction Warehouse, Wilmington Blues, 3 AM, 5_trope, TheSidewalk's End, Octavo, Double Dare Press, Arbutus, Eclectica, Facets, Skive magazine, and Sedona's Attic. His pre-Internet publications included literary magazines like The Sun,Gadfly, Timber Creek Review, Curriculum Vitae, The MacGuffin, The Monocacy Valley Review, The Iconoclast, and A Summer's Reading.

A Sardine on Vacation is his first non-book. Bob hopes to have a few books published soon to get himself on the plus side of the "Books Written" column.