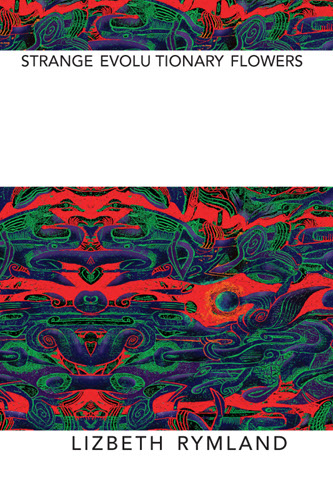 Liz Rymland has truly lived her life as an inspired poet, studied her life like a bone-throwing oracle, and understood her life as the alchemical odyssey that it is. Strange Evolutionary Flowers is a visionary autobiography flowing straight from her bewitching stream of consciousness -- glimpses of family, friends, scoundrels, lovers, landscapes and dreamscapes. Each serve a deeper and deeper self-remembering, and give birth to the shamanic journey poem of a most refined and illuminating soul.

Lizbeth Rymland's Strange Evolutionary Flowers is a fascinating slice of the world, as well as the dream, in which we are now living. As you  set sail across the vibrant ocean of her life adventure, be prepared to discover islands of sudden, fierce clarity accompanied by deep insights into the nature of just about everything.

Part Zen poet, part temple priestess, Liz Rymland writes with a style reminiscent of Jack Kerouac and Alexandra David-Neel. Strange Evolutionary Flowers is the diary of a stand-up alchemist on the prowl. These are fabulous tales, the stuff of fables. Liz Rymland, take a bow, you're a star-goddess in the making.

Lizbeth Rymland's Strange Evolutionary Flowers is part poetry, part memoir, part spiritual autobiography, and wholly, utterly unique. It is a book of vision (singular) and visions (plural) and a great deal more. There is another world, or at least new ways of perceiving this one. Read this book!

Lizbeth Rymland graduated in 1981 from Sarah Lawrence College, where she studied cultural anthropology, metaphysics, shamanic theatre and poetry, then studied anthropology and film history in Paris at Barnard College. Coming back to the United States, she lived in a farming community in the Berkshires where she studied permaculture land design and biodynamic farming.

A pilgrim and student of folk psychiatry, Rymland has pilgrimaged in India, Indonesia, South America, and the American Southwest, studying and collaborating with folk psychiatrists. She also trained as a residential counselor to disturbed children at St. George Homes, a Jungian Treatment Center in Oakland, California.

Because of her interest in alchemy, in 1991 she co-founded Bioremediation Services in New Mexico, an enterprise dedicated to popularizing constructed wetlands for cleaning polluted lands and waters, did public relations work for Seeds of Change, a company dedicated to gene-pool conservation, and served as public educator on bioregional and watershed issues, working closely with the Huichol leader Jaime Pérez at the inception of the Agua Dulce Self-Help Project in El Paso, Texas. This work involved the design of a training for county officials in sustainable-habitat land and shelter design.

With Kenny Ausubel she coordinated the 2nd and 3rd Seeds of Change Conferences which led to the creation of the annual Bioneers conference in San Rafael California. She is the founder of the Future Wilderness Project, in which a Mongolian-style Yurt was built from local materials and served as a meeting place for focus groups of teenagers and established mentors on subjects diverse as The Future of Perception and the Future of Sustainable Habitat.

At the Center for Contemporary Arts in Santa Fe, NM she curated exhibits requiring conceptual design and collaboration with four teams of artists and SW communities (Helen and Newton Harrison, Mel Chin, Wittenborn and Biegert, Mazeaud and Ikeda) who work as social catalysts on water and river issues. As an educational consultant, she has designed life-long learning environments for ranch owners and environmental programs for a philanthropic organization informing sustainable resource designers and strategists on arid-lands exchanges in the American Southwest and the Middle East.

Working for two years in a think-tank called International Synergy Institute, she designed a strategy for converting CNN into a "corridor of familiarization, dreaming and barter of practical wisdom between cultures" called "Cross-Cultural Bartering Toward Alternative Futures: Electronic Dreamtime TV.” When the institute moved from Los Angeles to New Mexico, she and her partner David Dunn founded Independent Media Labs, a cooperative of artists studios and businesses that thrived for ten years as a viable collective.

In addition to collaborating on botanical books and articles as well as filling artists’ commissions for her own poetry and libretti, Rymland contributed to a host of anthologies, including Psychedelic Shamanism, Psychedelics Reimagined, and Plants of Power, as well as magazines: Shaman’s Drum, and Perspectives in New Music. Her catalog of poetry is extensive.

She worked for three years as an on-call mental health worker, a one-on-one acute care counselor, at Piñon Hills Hospital in New Mexico. Over the years she has also been identified as a performance artist and teacher of performance poetry to teenagers in New Mexico.

In the years 1998 through 2001, she ran an artist residency project in Brooklyn, New York called Earth with the acclaimed performance artist, Tehching Hsieh. In New York she was employed by five philanthropic foundations as a consultant.

While in New York she completed two manuscripts, a poetry manuscript called Fugue States and a book of poetic non-fiction, a weave of many voices, called Strange Evolutionary Flowers. She helped to establish a non-profit organization called Starseed Education Company for an Institute of Yoga and Shamanic Studies for their work in treatment centers, wrote grant proposals and revised a book for Dr. Andrew Tatarsky on compassionate Harm Reduction approaches to addiction treatment which was published in June of 2002.

From the summer of 2001- till late Summer, 2003, Rymland relocated to Prague and trained and taught cultural anthropology in English for the academic years at Charles University’s Academy of Sciences to classes of Ph.D. students. While in Prague, she worked as a consultant for the Soros Foundation where she developed interdisciplinary conferences and coordinated these with her collaborator, Milos Vojtechovsky.

With Milos Vojtechovsky she developed a project called The Lost & Found Expedition, dedicated to creating nomadic interdisciplinary teams recording endangered knowledge throughout Eurasia while travelling in an streaming media bus. During this time she helped to manage the careers of master percussionist Hearn Gadbois and mediator and poet, Anice Jeffries, her close friends who joined her for the winter in Prague after 9/11 impacted their homes in downtown New York.

In the autumn of 2003 through the Summer of 2005, Liz taught writing and SAT preparation to Chinese American children and ESL language to Chinese and Taiwanese youngsters at Shareworld. Learning Center in San Jose. She is a consultant and co-owner of Ominipresent Sound Research and Development in San Jose. She is founding member of Community Resource Alliance in Santa Cruz, California and is presently writing a book on Rhythmic Arts of Discovery, Remembering and Recovery, a book of rhythmic and physical lesson plans for teachers and parents.