I first met Joe in 1970, while teaching at the Iowa Writers’ Workshop, when he visited Iowa City in the company of Geof Hewitt (who had anthologized Joe’s work in Quickly Aging Here, Anchor Books 1969), but only got to know him well five years later when my peregrinations took me to Baltimore. We became close friends and remained in touch through the late seventies, eighties, and early nineties. On and off, for almost a quarter of that recently ended century, we shared thoughts and words and bright moments. 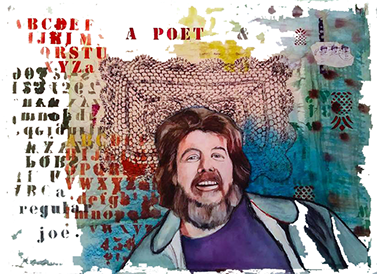 Joe Cardarelli (1944–1994) was a poet, painter, graduate of the Johns Hopkins Writing Seminars, and teacher of writing at the Maryland Institute College of Art for 27 years. Cardarelli pushed generations of MICA artists to incorporate writing into their creative repertoire, and regularly collaborated with his faculty colleagues on projects and performances. He is noted for establishing poetry series such as the Black Mountain poets, St. Valentine’s Day Poetry Marathon, and the Spectrum of Poetic Fire at MICA. In its 25th year, the Spectrum of Poetic Fire reading series still brings quality poets to MICA’s campus for readings during the academic year.

In his “Black Mountain Poets” series in 1983/84 he gathered material for a documentary video, Black Mountain Revisited — a historically invaluable collage of interviews and readings given by Robert Duncan, Robert Creeley, Edward Dorn, Joel Oppenheimer, and Jonathan Williams — in the case of Duncan and Oppenheimer, some of their last readings on record. Over the years, Allen Ginsberg, Amiri Baraka, Ted Berrigan, Alice Notley, Anne Waldman, Maureen Owen, Ed Sanders, and many other representative writers of The New American Poetry were frequent visitors to the Institute.

Anselm Hollo (12 April 1934 – 29 January 2013) was a Finnish poet and translator. He lived in the United States from 1967 until his death in January 2013. In 1965, Hollo performed at the "underground" International Poetry Incarnation, London. Also in the same year, the first customer of the Indica Bookshop, a certain Paul McCartney, is known to have bought, among other things, the book & it is a song by Anselm Hollo the day before the bookshop was officially opened.

Hollo translated poetry and belles-lettres from Finnish, German, Swedish, and French into English. He was one of the early translators of Allen Ginsberg into German and Finnish.

Hollo taught creative writing in eighteen different institutions of higher learning, including SUNY Buffalo, the Iowa Writers' Workshop, and the University of Colorado at Boulder. Since 1985, he taught in the Jack Kerouac School of Disembodied Poetics at Naropa University, where he held the rank of Full Professor.