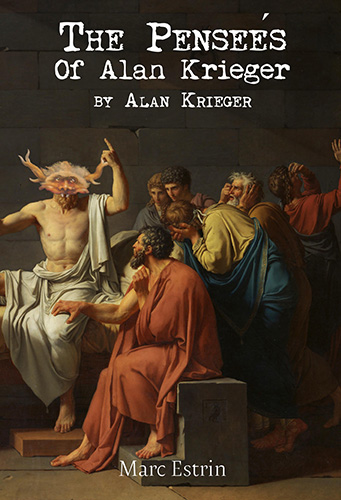 After having had more than his say in Golem Song, and The Prison Notebooks of Alan Krieger (Terrorist), Alan has pushed into line again to make sure that these distillates of wisdom would not be lost in the après-moi deluge of Monsieur Tromp.

Standing on the shoulders of a diminutive giant, almost crushing him under his weight, Krieger adopts the format of Pascal’s masterwork to lead the reader through selected complexities of twenty-first century life, as suffered by himself, his cat, Myshkin, and pet octopus, Athena. His hospice attendants, being out of the room, were not able to record his last words, but Krieger himself was able to scrawl his next-to-last words (appended within) on a piece of Kleenex.

It is possible that with this small notebook, we will have heard the last of him, since he is now lying in permanently decaying state underground at The Hebrew Free Burial Society for Indigent Jews on Staten Island. But of course, one never knows.

Some Comments About Alan Krieger’s Previous Adventures in Golem Song

Estrin’s abrasive antihero’s commitment to battling false messiahs is morbidly compelling, and his logorrhea is occasionally dazzling. As Estrin raises a host of tough moral questions, drags philosopher Martha Nussbaum into the unsavory proceedings, and tinkers with the story of the golem, his mind-bending humor is at once intellectual and ribald.

Alan Krieger has prodigious intelligence along with prodigious girth; everything about him is supersized.  He can argue equally well about the virtues of White Castle hamburgers or why Aristotle’s theory of rational emotion should be applied to his own concept of disinterested rage.  He is well read and loves to spout pithy versions of classic stories, such as an uncomfortable retelling of Oedipus to his mother on Mother’s Day.

Alan Krieger is not your standard issue 35-year-old emergency-room nurse with a nonstop mind and mighty mouth, living with Oedipal ma in a sixth floor New York apartment "floor-to-ceilinged" with scholarly tomes, ominously reminding him of the Texas Book Depository. Often endearing but just as often infuriating, tossing off bon mots and potshots cavalierly quickly, Alan is one of those people you either love or hate effortlessly and uncritically.

Alan is larger than life, figuratively and literally. A huge man with huge appetites, he is brilliant, creative and multi-talented. He may be the most widely read fictional character ever to jump from pen to page. His stream-of-consciousness musing is filled with facts, interesting and obscure, and the cadence of his ranting is almost musical. His personality is so forceful that those around him can only tolerate his presence for a period of time before his obsessive paranoia interferes with his relationships and causes each friend or family member to abandon him for a calmer Alanless existence.

It's no mere happenstance that Alan Krieger uses the volumes of the Encyclopedia Britannica and of Will Durant's "The History of Civilization" to fortify a window in his New York apartment that he is converting into a sniper's perch. Notwithstanding his misbegotten idea to "make things a little better for all of us" by igniting an ethnic or racial war, Krieger is perhaps the most erudite, witty and well-read nudnik in contemporary American literature.
RUTLAND TIMES ARGUS 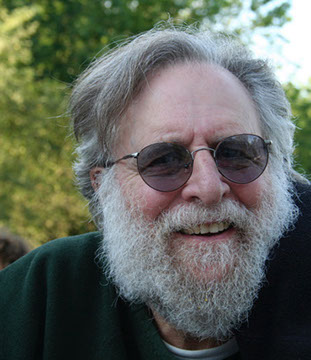