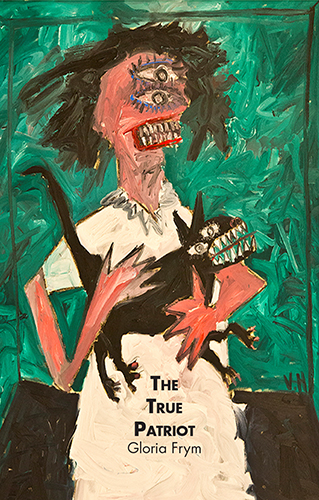 Fueled by their highest ideals and delusions, the people in Gloria Frym’s The True Patriot suffer trivial, modest, and sometimes catastrophic failure when they try to change the world. Frym's signature humor and wit create a manic progression of language, as her parade of characters attempt to navigate the nightmarish landscape of 21st century America. The wars of American-making, abetting, and quelling are all part of the tableau.

Gloria Frym is a writer who specializes in the art of the aside, the slice of life, the sly thesis, and the telling parenthetical. She digresses with intent, for “No indecisive moment is insignificant.” The True Patriot, as much a collection of dispatches as stories, puns on the politics of everyday life to show us large, frightful and comic absurdities lurking in the quotidian. Sounding out surface emanations to show how indiscreet and porous the seams between categories are, she writes our scattered condition of incompletion and contingency. Picture a figure, part wry philosopher and part witty kid throwing a handful of rocks into a too-complacent lake. Causes sink, and we are left to contemplate their rippling effects. Everywhere these effects connect, their causes hidden, just as “one lie begets another.” How to excavate what is already above ground? Begin anywhere, and “be reborn on paper.”

Gloria Frym brings satire and sympathy to this earnest world ... with her poet’s eye for detail, Frym gives her stories just the right point on which to pivot. Frym can also stretch an allusion for comic effect ... she is at her best describing the subtle chaffing of social boundaries.

Frym addresse[s] the world’s problems with bemused critique, at once linguistically swerving and point-blank; if David Sedaris were a symbolist with a lyrical sensibility, he might write something like Frym’s Patriot.

Jonathan Lethem likens Frym’s vision to Grace Paley, who plays similar themes, and that comparison is just. Like Paley’s urbanites, some of Frym’s people suffer trivial, modest, and catastrophic failures fueled by their idealism and hope. Their projections intersect with their capabilities and provide the comedy and tragedy for their lives. [Her work] radiate[s] a clarity about what has become this culture’s constant  predicament with maintaining a human face and human intimacy. The injustice and terror around Frym’s characters injures, intimidates, and baffles, but there are curiosities and victories and joys, too—her people have the courage to be in the world. 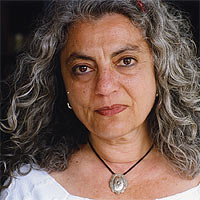 Gloria Frym was born in Brooklyn. Her recent books of poetry are The Stage Stop Motel and Mind Over Matter. She is also the author of two short story collections—Distance No Object and How I Learned. She teaches at California College of the Arts in the San Francisco Bay Area. 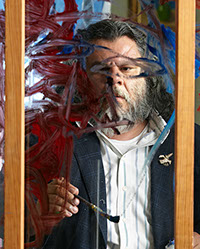