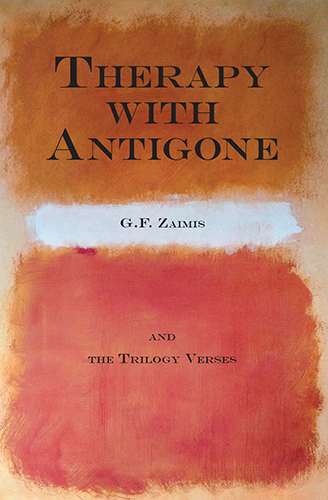 Extraordinary content with spiritual insight and academic depth…Few, if any writers of our day can ground one part of the mind in the material world while allowing the other to roam in philosophical eternity like Ginger Zaimis, as if it were the neighborhood she grew up in. Part of her psyche—creative intelligence—resides in the world of Heraclitus, Sophocles and the other in the light of presence…Her ability to unite dualities; synthesize opposites as One that are greater than the sum of their parts…Breathtaking!

Poet, Author of Pythagoras in Love and Literary Executor

Ginger Zaimis’ idea of observing Greek, Norse and biblical mythologies through an architectural lens stands boldly at the intersection of contemporary and comparative literature. Her ‘text-tile’ is poetry as well as philosophy, while her walls, ceilings, and floors are metaphors’ built of letters and words shaped by a vivid curiosity. Her work reveals the in-between of worlds, strata and disciplines by inventing new prototypes.

Someone who bridges the arts with mythology, history and philosophy from the ancient world…Ginger is a poet, thinker and serial creative who doesn’t fit in-to-a-box but rather perceives life out-of-the-box…A polymath and philhellene, she connects abstractions while bringing architectural order to the world by shaping words, poetry and perception—radiance.

Ginger F. Zaimis is an American poet, essayist and polymath who specializes in architectural forms. She is the Arts and Literary Chair (Greece) for the International Friends of Bibliotheca Alexandrina, The Library of Alexandria.

Her grammatology unites the intersections of contemporary modernisms, comparative literature and mythology to connect multi-disciplinary dialogues with language, history and philosophy while uniting the arts and sciences. Her work has been presented at centers for contemporary art, biennials and museums while her writing endorsed and published by The Athens Academy as well as her poetic perspectives by The National Book Critics Circle. She was PEN AMERICA’s Joyce Osterweil Poetry finalist (2014) for best, first collection.

She is the author of two collections of poetry, Prometheus Rebound and Other Mythology and Excavated Athens to Alexandria, co-author of Philosophy and Poetry with Evangelos Moutsopoulos, Philosopher of Kairicity, as well as, various essays and reviews and the architect of the poetic forms, The Portico Convention and the Triptych.

A Southerner who grew up in Charleston, South Carolina and spent her early years in New York City, she now lives in Athens, Greece.