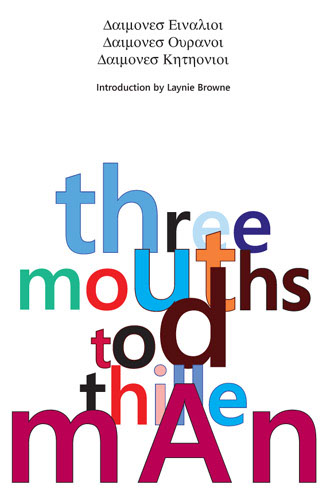 No single note can contain or describe this work, nor is there a quiet sameness which will lull one beyond question. Instead there is a composed concentration in the center of calamitous movement—movement which embodies inquiry, which listens as a means of locomotion, transferring setting to sound, venturing out along many circumstances.

Laynie Browne, from the introduction

..suspension of linguistic meaning that verges toward music, a mid magnetic between meaning and resonance that touches on both only to veer off, return, whirl to a stop and begin again... there is a liberating aspect to hearing or reading a poem that eludes signification only to capture it soon enough...with echoes or Samuel Greenberg and Hart Crane...

Tod Thilleman began to attract attention with his sequence collection Wave-Run and has continued to mine secrets and depths inherent in language, but often ignored. The magic of words—that they have lives of their own beyond their obvious power to communicate information .... Between continues that process, informed by his conductus, the Daemon. It is a great privilege to have been allowed to follow the quest.

Zukofsky tells us that those without greek can still pick up the sound of the sea—and know that it is the sea—from hearing Homer’s language. Those who sound the language of Tod Thilleman’s Wave-Run may at first feel submerged in a foreign language only to arrive at a later—and deeper, more alive—realization of English and of a different sea. “Cupped, cupped coiling wave contains/somewhere line’s form’s language.” The same is true vice versa.

Wave-Run roars up the beach with all of modernity and its detritus glistening on the crest. Thilleman’s craft, the drive and punning images of his language, movingly replay in contemporary terms the old myth of Ocean and our fascinated love of it.

Wave-Run’s surge and inevitability have as much to do with our individual selves as with the world’s primal forces. This book is a spiritual journey. It is also an intellectual journey gathering several traditions—the Classical of Homer, the Romantic of Shelley, the Modern of Pound and Olson. Thilleman’s unabashed indulgence in the sensuous, moreover, reveals his sympathies with Moore and Crane, Zukofsky and Duncan. Wave-Run’s deeply intuitive, intelligent and vibrant poems will gain a great many admirers.

...it returns the city of New York to water, to the sea...Wave-Run is a celebration of the poetics of flow... of the line always in motion.

One important realization Sonic Model urges is that sound itself is the fundament of our lives. The roar through a subway wind tunnel is not unlike the roar of the beach.  To be alive everywhere is a commitment implied in all his work.

T Thilleman moved to New York at the age of 18 and worked for a brief period with Pace Editions. He is the author of numerous poetry collections and the novel Gowanus Canal, Hans Knudsen. From 1991-1999 he was editor of Poetry New York: a journal of poetry & translation.