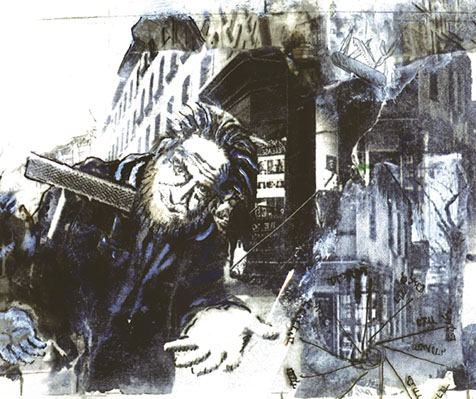 Tsim-tsum is a Hebrew word meaning “contraction” or “self-limitation”, and according to Isaac Luria, a 16th century Kabbalist, it was YHWH’s first move in creating the universe: He had to tsim-tsum, because if He didn’t, there would be no room for the material world. What’s most interesting about this is that His first act is not one of emanation, but of hiding. The second most interesting thing is that the tsim-tsumed God is quite similar to the postulated infinite compression before the big bang.

Anyway, God is living in a ’96 Hyundai, having returned to check out his creation. He doesn’t like what He sees or hears on the recalcitrant radio which comes on at will reporting news from the 14th to the 20th century.  So He decides to do a second tsim-tsum, in order to give humanity a little more room for its improvement. There are four chapters (each prefaced by a drop cap Y, H, W, and H). In the first He eats his tail and legs; in the second, His arms; in the third, His torso; and in the fourth, His head — an ingenious topological trick.  In this last chapter, He is visited by Death and the Death Orchestra, who populate the airbag. As He finally disappears, Cheshire-catlike, into his own smile (or grimace) we don’t know whether Tsim-tsum has been achieved, or simply the death of God.

Marc Estrin was born in Brooklyn, New York on April 20, 1939, is a writer and political activist. He attended Queens College, studying Chemistry and Biology, then studied Theater Directing at UCLA. Estrin came to novel-writing late. In the fall of 1998, he and his wife Donna were on holiday in Prague and decided to visit the grave of Franz Kafka, whose work had always been important to him. His father had challenged him to read The Magic Mountain during the summer before he attended college. He left a note on the grave, inviting Kafka to drop by if he ever found himself in Burlington.Through the

1960s he worked in various repertory theaters in the United States, including the Pittsburgh Playhouse and the San Francisco Actor's Workshop. But, the Vietnam War and Bertold Brecht encouraged him to become politically active.

He helped found and was the first coordinator of the Burlington Peace and Justice Center, working on anti-war campaigns, and most recently has stood for seven years in all weather with a Monday-through-Friday peace vigil in Burlington. These days, his political work focuses on two arenas: a just settlement between Palestine and Israel and what he considers to be crucially unanswered questions of 9/11. These political issues are discussed in some of his writings. In 1985, he enrolled in the Starr King School for the Ministry. He became an ordained Unitarian Universalist minister in 1988, and was active in the church, but found it conflicted with his political work. He is also a cellist[1] and vocalist who has worked with several orchestras including the Vermont Philharmonic Orchestra, the Lyric Theater Orchestra, the Vermont Symphony Chorus.