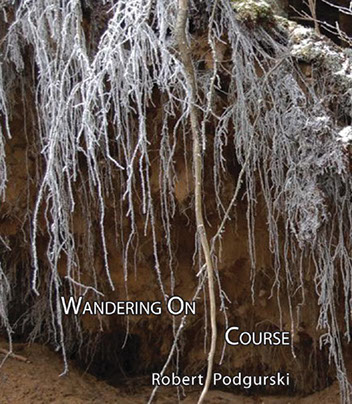 These poems exude from an intimacy with natural forms, sidestepping or sideswiping the abuse of a Nature that our science—having thoughtlessly cast magic to its margins—unfecundly abjures. That and the matrix of magic’s interstices with language. Magic cannot do without poetry as poetry without magic dwindles to the sad reinforcement of consensual norms.  No consensus here, but an authority whose writ is southern earth and hidden fire and stone.

Robert Podgurski is a magus and these poems cast spells. This is not a metaphor—it’s a warning.

Sufi-dancing at the center of an elemental hora, Podgurski is at that fortunate crossroads where one does not have to choose yet between the agora and the desert. His senses gather full tilt the juicy and aromatic effluence of eros, all conjunctions appear in the rich light of germination. The poetry that his eros presents in a lovely series of ladders is filled with the muscular ease of youth promising to his readers the flickering seduction of agape, love supreme.

Andrei Codrescu, author of So Recently Rent a World: New and Selected Poems, 1968-2012

Robert Podgurski has been practicing magick and researching esoteric topics for over 30 years now. He has written and published articles on John Dee, Magick, and the Occult and conducted lectures and workshops around the US. Last year saw publication of the long-awaited The Sacred Alignments and The Dark Side of Sigils (gridmagick.com). Bob currently resides in the Piedmont region of North Carolina where he practices Qui Gong, poetry, mountaineering, and the magickal arts. His poetics are stated in "Double-Wanded Motion" which is included in Wandering On Course.