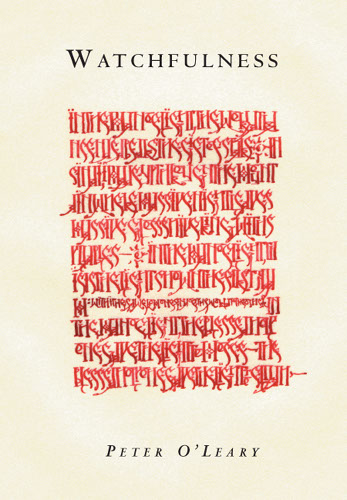 In Watchfulness, Peter O’Leary delves into arcane, biblical and mystical texts as well as the art of iconic architecture to deliver a new poetry. Here the center is “concealed in concealment” wherewith a new composition can be, in Duncan’s powerful phrase, “made loose.” Reminiscent of both Robert Duncan’s “Passages” and Ronald Johnson’s Ark, these verses draw influence from the aether of poesis itself, thus charting a thoroughly contemporary and soulful terrain.

Peter O’Leary’s poetry, all “Gold, myrrh-soot/and smoke,” emerges from an ancient matrix of Eastern Orthodox, Islamic, and Jewish mysticism, and yet remains wholly of our time and place. Like Robert Duncan and Ronald Johnson before him—or like his Louis Sullivan, designing and building the Holy Trinity Russian Orthodox Cathedral in Chicago, 1902—O’Leary seeks the immanence of lost or discredited wisdom traditions, in order to restore for us a living sense of cosmos. An icon comprised of an alphabet, Watchfulness, in its hieratic beauty and uncanny arabesques, introduces us to a poet

of meticulous skill and architectural ecstasy.

One of the best young poets of our time.

Peter O’Leary has edited two volumes of Ronald Johnson’s poetry—To Do As Adam Did:

author of Gnostic Contagion: Robert Duncan & the Poetry of Illness.