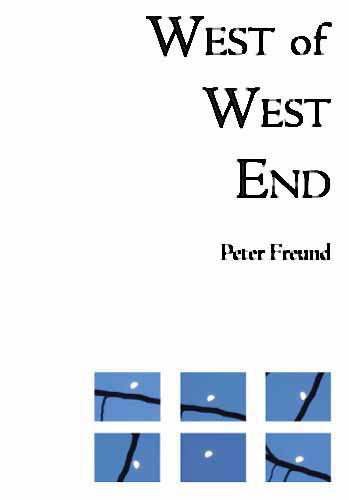 THEORETICAL PHYSICIST PETER FREUND LAUNCHES INTO A SERIES OF ENTERTAINING AND INSTRUCTIVE FICTIONS WHICH SEEK NOT JUST THE EMOTIONAL DOWN-SWING OF HUMAN RELATIONS FOR IMPACT BUT THEIR FUNDAMENTAL IMPOSITION AS REALITIES CONTAINING OBJECTIVE LOVES AND HATES. FATE, HERE, WRIT LARGE, DEMANDS OUR ATTENTION IN THE UNFOLDING OF SOCIAL CONVENTION.

FRIENDS WILL SOMETIMES SAY, “You have to meet X, you’ll love each other!” You meet X and you don’t love each other. Actually, you dislike each other at fi rst sight. A good friend will be philosophical about it, shrug his shoulders and say, in the local parlance, “c’est la vie.” The trouble is, you’re all poets, working the same turf.Then there is the thorny question of gossip, which is the Number One pastime of human beings. Only people without any friends discuss politics and philosophy without contextual gossip. An idea seems so barren and bor-ing if unattached to a person! The best idea, even quantum mechanics, is so much more interesting when considered in the light of Heisenberg’s collabora-tion with the Nazis. Which brings up a question: Can there be a common endeavor, whether physics or poetry, that can remain objective when the researchers involved are also people? According to Peter Freund, one of the founding physicists of String Theory ... the answer is Yes and No.

Peter George Oliver Freund was born, raised and educated in the Romanian city of Timişoara. Because of his participation in an anti-Soviet demonstration in November 1956, Freund was arrested by the communist security police, the Securitate, and lined up with other students between a wall and a line of tanks, essentially an armored firing squad, which, in the reigning confusion, did not fire.... In 1959 he managed to leave Romania.

Freund obtained his PhD in theoretical physics at the University of Vienna, with Walter Thirring as his thesis adviser. Since 1965 Peter Freund has been on the faculty of the University of Chicago. He lives in Chicago with his wife Lucy, a clinical psychologist. They have two daughters, both married, Pauline an attorney in Seattle, WA and Caroline, an economist in Washington DC, as well as five grandchildren Rebekkah, Raphael, and Charlotte Smither in Seattle and Andrei and Marko Freund in Washington.