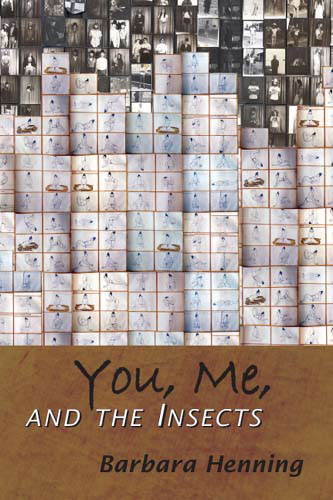 You, Me, and the Insects

To understand the future one has to investigate what comprises the ascent or gathering of spirit above all things. A spirit that shoots itself into the future on the sonic blasts of anger and hatred will materialize, for instance, in alarums of personal vendetta only; personal vendetta enlarged can only result in a clash of egos. So it is that out of the personal particular, Henning has constructed a series of prose narratives in You, Me, and the Insects that confronts the questions Where do we come from, Where are we now, and Where do we go from here. I say narratives in the plural because it is not through one conception of the present that we receive news of the past. It is through a repeated investigation of the past (in this case a personal past) that allows for the arc of spirit that accumulates toward the end of You, Me, and the Insects.

Through a repeated approach to life in India, Gina, the artist at the center of Henning’s novel, comes to understand the small activities of day-to-day survival in cosmic tableau. What shows through here, I think, more than anything is the seeming perennial American approach to writing as a search for influence in world literature. It’s still the same, this attending to size and scale as an approach to what a literary text is supposed to be transmitting. What Henning Transmits in You, Me, and the Insects is a constant, eternal figure within the act of writing itself that does not move higgledy piggledy independent from self-reflection. This is a novel of what modern convenience can be distilled to mean for our future.

Our narrator, Gina, is a widow with two grown children. An artist with a profound interest in yoga as a life-changing philosophy, she travels annually to Mysore to study with different gurus. This year, she hopes she has found the one who will fulfill her expectations.

Barbara Henning’s astonishing new semi-autobiographical novel, You, Me and the Insects, is set in Detroit’s Cass Corridor, New York and finally in Mysore, India, some 20-odd years later. While in India, Henning’s narrator, Gina grows spiritually, developing a profound relationship with her guru while discussing yogic traditions manifested in India and the United States, as well as the history of Hindu mythology and sacred Vedic texts. But one of the few clear philosophical directives he gives her—“It is your duty to be joyful”—illuminates the foundation of their work together, and informs Henning’s project as a whole: Discipline is an undeniable component in a spiritual quest, but creative force is equally vital. Enlightenment is not for the passive. In You, Me, and the Insects, Henning has written a testament to living and devotion.

You, Me, and the Insects is a heartening, bittersweet story of a spiritual struggle and transformation, told in parallel universes of mother, writer, wife in secular USA and dedicated struggling western yogini in luminously detailed India. The writing is marvelously rich, layered, the narrative is compelling. The phenomenal world is the source of terrific insight, delight and surprise. This is not a pretentious New Age memoir but an ageless picaresque and imaginative voyage.  A major accomplishment for this  extremely salient, charged writer.

This is a miracle of a book. Barbara Henning has taken seemingly unpromising materials–the demanding study of yoga in southern India; the daily incidents of life there; the recollection of starting a family with a husband now dead–and transformed them into a narrative that is gripping, entertaining, and intensely moving. It is a triumph of imagination restoring irresistible vivacity to the perishable treasures of memory.

Barbara Henning was born in Detroit, Michigan. She has lived in New York City since 1984 and is the author of three collections of poetry, Smoking in the Twilight Bar (United Artists, 1988) Love Makes Thinking Dark (United Artists, 1995), Detective Sentences (Spuyten Duyvil, 2001), a novel Black Lace (Spuyten Duyvil, 2001), a novel You, Me, and the Insects (Spuyten Duyvil, 2005);  three artist book collaborations, Words and Pictures (with Sally Young), The Passion of Signs (with Georgia Marsh, Leave Books), and How to Read and Write in the Dark (with Miranda Maher); and two pamphlets, Me and My Dog from Poetry New York, In Between from Spectacular Diseases (England); and a series of photopoem booklets, Found in the Park, Up North, Aerial View, Teacher Training, Thakita Thaka, and My Autobiography.