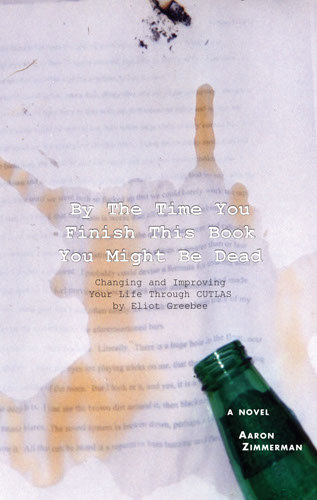 By The Time You Finish This Book

Changing and Improving Your Life Through

French philosophy forms a conceptual undercurrent for the book: the sophistic arguments of this super-sized Sartre harken back to the perverse enlightenment logic of Sade, and Zimmerman's prose sparkles when he engages Batialleian religious imagery (e.g., the "porcine holocaust," or Eliot Greebee's meditations on death while floating drugged and naked upon the Atlantic). Zimmerman draws a charmingly puerile Eliot, unable to wait for a moment, philosophically unable to delay gratification, physically unable to resist consuming any potable on his person, whether candy, drugs, or alcohol. Eliot is completely determined by consumer culture and dreams in "richer colors, deep green the color of Astroturf, purple like grape Bubble-Yum, orange like Orange Crush, red like Hawaiian Punch."

Brooklyn is the home of debut novelist Aaron Zimmerman, while the East Village is home to his fictional protagonist, the overweight author Eliot Greebee, in By the Time You Finish This Book You Might Be Dead. Chapters from the fictional writer's fictional nonfiction guide, Changing and Improving Your Life Through CUTLAS, alternate with the narrative of

Greebee's antic pursuit of a maiden fair in this send-up of the self-help industry. (CUTLAS stands for Cost/benefit United-based Transactional Life Analysis System, Greebee's proposed panacea for life's woes.) "There's a wonderful overlap," says publisher Tod Thilleman. "It's a madcap adventure of 24 hours in New York, but the general thrust is actually very dark. This manic guy is obviously in his own world. The action ends up in Coney Island."

Funny and Deeply poignant, Zimmerman has masterfully combined a must read self-improvement manifesto with a sexy, cocaine and alcohol fueled epic. A neon illuminated lost weekend among the damaged, vapid and disparaging.

Aaron Zimmerman leads creative writing workshops in NYC  through Manhattan Writers, the writing workshop program he founded in 1997. His fiction and poetry have appeared in numerous literary journals and he holds an MA in Creative Writing from City College. Aaron is also Founder and Executive writing workshops for people from groups historically deprived of voice in society. He lives in Brooklyn, NY with his girlfriend and their beagle, Chester.