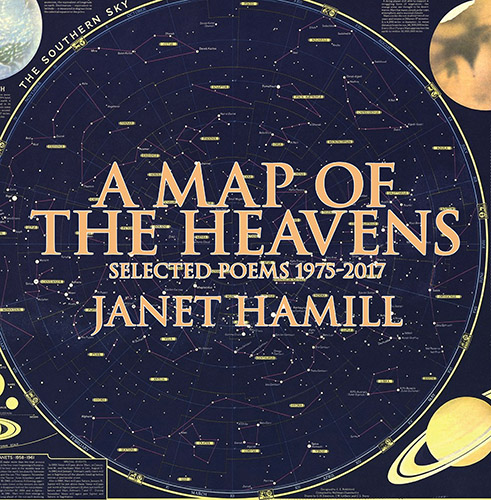 This wondrous book contains a life lived in poetry. the trouble is finding one decade’s worth that outshines the other. Hamill’s commitment to poetry & the light it sheds even in its darkest moments are unshakeable. her voice has been consistent for these past 40 odd years with not an iota of diminishing strength. Hamill starts out fully formed in the 70’s and remains so until the present. her poems are never “clogged with an obstruction of black orchids” but rather blossom—each as a vibrant flower—each preceding or proceeding the other, delivering sights, smells, tastes, “sounds that come and go” into all our senses & beyond. this book is not the “Tragedy of Janet Hamill” but rather the triumph of poetry… indulge in & be “devoured by [her] “words” as you too become a “sleepwalker through time”…on “voyages of melancholy”, mirth, desire, longing & history. may these poems help to “fill your holes” with their bare-knuckled authenticity & cause your very soul to “flame up.”

Janet Hamill steers the heart-shaped barque of her poetry over vast seas and vertiginous narrows. Both exotic and intimate, her travels follow a unique and hypnotic star-map. She is an enchanting teller of the oldest tales and an accurate guide to the last century’s best reach into ours. Read these poems like lines on a palm or view them like a Truffaut or Hitchcock film. They are visceral and erudite. They rewarded this lucky reader

with mystery, delight, and sensual music.

Janet Hamill is one of the great living voices of American Surrealism. Inheriting Modernism with open arms, she’s conducted a lifetime of lithe and sure-footed experiments in “derangement of the senses”—New York style. Read these poems and be dazzled. The magic carpet has left the launchpad. This is wild and lovely poetry to chant

in the woods, read in a cafe, and share with only your coolest friends.

In A Map of the Heavens, Janet Hamill transports us across oceans, continents, constellations, and parking lots with the guile of a true storyteller. Hamill explores the hallucinations, myths, nerve endings, and steganography of a life traveled with a deep knowledge that sometimes mysteries should remain mysterious. Packed with unforgettable

imagery, this is a dazzling collection. Enjoy the journey!

To enter Janet Hamill’s Selected Poems is to be inside

a body of internal whirlwinds      a language of

time   melting in a thousand geysers  of raving mystic visions of

cities    crumbling   into a billion stars.  A modern woman boldly inhaling her life.

A Seer exhaling the universe. 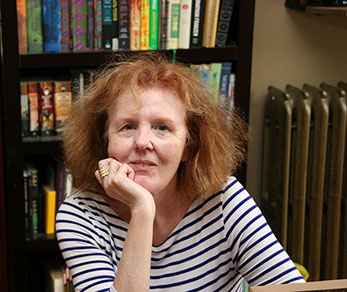 Janet Hamill is the author of eight collections of poetry and short fiction—Real Fire, Knock, Tales from the Eternal Café, Body of Water, Lost Ceilings, Nostalgia of the Infinite, The Temple, and Troublante. She has released two CDs of spoken word and music in collaboration with the bands Moving Star and Lost Ceilings—Flying Nowhere and Genie of the Alphabet.  Her work has been nominated for Pushcart Prizes and the Poetry Society of America’s William Carlos Williams Prize. Tales from the Eternal Café was named one of the “Best Books of 2014” by Publishers Weekly. A strong proponent of the spoken word, she has performed at The Poetry Project at St. Marks Church, The Walt Whitman Cultural Center, the Bowery Poetry Club, the Knitting Factory, CBGB’s Gallery, the Nuyorican Café, Central Park Summer Stage, Lowell Celebrates Kerouac, the Andy Warhol Museum, Seattle’s Bumbershoot Festival, the Liss Ard Festival in County Cork, Ireland, Patti Smith’s Meltdown Festival in London, the Latitude Festival in Southwold, England, and Liverpool’s Heartbeats series.  In collaboration with the bands Moving Star and Lost Ceilings (formerly named Moving Star) she has released two CD’s of spoken word and music, Flying Nowhere (Yes No Maybe Records) and Genie of the Alphabet (Not Records). A documentary about the creative process of Janet Hamill and Lost Ceilings, Bearing Witness, is viewable on You Tube.

Hamill has been a writer-in-residence at Naropa University, a teaching assistant at New England College. She has also lectured and taught workshops at the Poetry Project, the College of Poetry, the Seligmann Center, Cabrillo College,  London and Liverpool.

After residing in NYC for three decades, Hamill presently lives in New York’s Hudson Valley, where she is an artistic advisor at the Seligmann Center for the Arts and Director of the Center’s literary program MEGAPHONE.