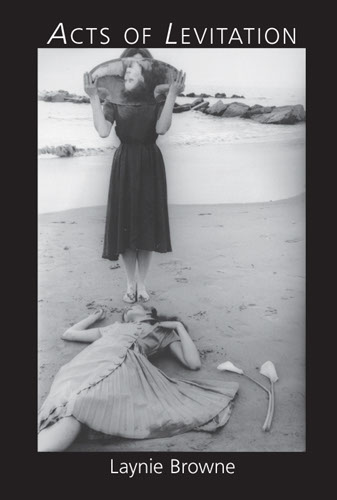 Amelia has the ability to levitate. During her wanderings through dream galleries, costumed performances, and future libraries she meets Clara (an elusive photographer), Sebastion (part human, part lion) and a chorus of cynics who exist only in partial bodies.

This challenging first novel is a high-wire act of great beauty and invention. Part quest narrative, part ghost story, Acts of Levitation is ultimately a study in longing—for the “other” who might be lover or sibling, and for the “self” hidden in the center of a dream. Laynie Browne enlists all the colors of the spectrum, and then some, to spin her magic. Her writing unfolds like a pre-Raphaelite dawn, expanding outwards and always mesmerizing.

An ultra femme, absolutely exquisite writing/vision. Acts is extraordinarily imaginative and remains with me as a luminous benchmark.

….an uncanny blend of grammar and history.

Like Scherherazade, Lewis Carroll, or the Shakespeare of the late romances, Browne possesses an ability to dazzle the reader by creating wondrous worlds in which the usual laws of plausibility are suspended. Indeed, her writing is saturated with the echoes, not only of these writers, but of numerous sources derived from the canon of fabulist literature.

…reads like the bewitched counsel of an herbalist dwelling deep within the enchanted forest of language.

Words murmur a music of spine and scented resin. Their aggressive approach to linguistic play and totemic vision offer a genuine mechanism for the dilation of the pupils.

Laynie Browne is the author of several books, including Gravitys Mirror, The Agency of Wind, Lore and Rebecca Letters. With others, she has curated poetry series at The Ear Inn in New York City from 1992-1995, and later as a member of The Subtext Collective in Seattle 1996-2001. She was awarded The Gertrude Stein Award in Innovative American Poetry three times (1993-1996). In 1998 her work was anthologized in the book Poet's Choice, edited by former poet laureate Robert Hass. In 2000, she received a Jack Straw Writers Program Award. She has taught poetry-in-the-schools in New York City and Seattle.