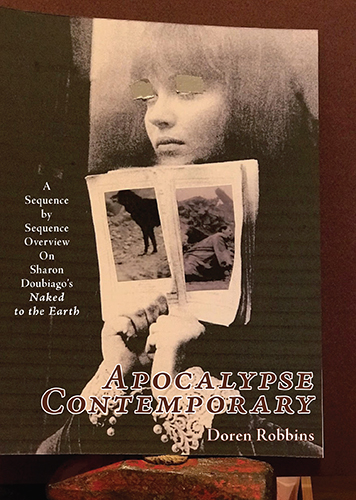 Sharon Doubiago’s Naked to the Earth

Doren Robbins has produced an extraordinarily in-depth critical study, Apocalypse Contemporary: A Sequence-By-Sequence Overview On Sharon Doubiago’s Naked to the Earth. Robbins offers the reader a kaleidoscopic glimpse into the psyche of a uniquely confessional poet. It is a breakthrough opportunity to penetrate beyond the written page and explore the challenging set of dynamics behind it. The rigor of Robbins’ scholarship as the thread of reasoning and analysis unwinds is cantilevered with intuitive correspondences of ideas brought in from widely varied sources, producing a mosaic of literary/philosophical voices joined in meditation on the inexplicable dimensionality of existence expressed in Doubiago’s poems. At the root of this deep dive is a highly developed comprehension of her complex sensibilities crystallized in the writing and a compassionate interpretation of these facets of her lived experience. Robbins follows an intimate thread in Doubiago’s writing through labyrinthine corridors connecting topos of the self in the form of memories seen from the present in which the poems were written. Focusing closely on Doubiago’s recountings of abuse and incest in her writing, as well as her ongoing concern for others who have been damaged in these and in other ways, such as Native Americans and Latinos she has known, Robbins pulls back the lens to reveal social, cultural and psychological superstructures within which these durations are embedded.

I haven’t believed in the flaccid poetry establishment since the late-1950s-1970s, when street people, misfits and hungry voices ruled the roost. If Sharon Doubiago is chosen poet laureate instead of the safe university professors of past decades, I’ll believe again. Doren Robbins persuasively argues for her importance in his fine-grained, muscular analysis that is dense, thought provoking and always rewarding reading. I’ve been a fan of both of their work for decades, and with the passing seasons each gets more courageous, provocative, and sensitive to the calamities of modern life.

John Solt, author of Shredding the Tapestry of Meaning: The Poetry and Poetics of Kitasono Katue (1902-1978)

With the vigor, breadth of reference, and passionate outrage to match his subject, Doren Robbins provides a masterful guide to Sharon Doubiago’s Naked to the Earth (Wild Ocean Press, 2017). Martin Buber’s philosophy of I - Thou guides Robbins’s critique as he examines the core concerns of Doubiago’s demanding investigation of contemporary America. For Doubiago, Buber’s I - Thou dynamic are both intra and inter-personal. She is a confessional poet whose “I” expands to meet the “Thou” of the suffering present-day world. Sex, including her life-long quest to recover from incest, older women’s experiences of being seen and not being seen, the havoc of war and racism, and the hopeless conditions of America’ homeless all converge in the poet’s courageous lens.

Informed by his reading of Doubiago’s other collections, Robbins elucidates her urgent themes, which she revisits and deepens in Naked to the Earth. By situating her work within American literary currents, he finds its antecedents in confessional poetry, which he feels that she redefines, and in the works of Pound, Olsen, and Levis. I especially appreciate his analysis of Doubiago’s approach to her sexuality and to the men she has loved. Robbins contrasts her poems on these subjects with those of other contemporary women poets who employ safe-guarding stylistic distance. Citing Roland Barthes observation that it is rare for a writer to ‘’combat both ideological repression and libidinal repression,” Robbins claims this accomplishment for Doubiago.

Robbins has written an essential, challenging analysis of a poet who embraces the world with maternal ferocity. Inspired by Doubiago’s oeuvre, his conclusion calls for liberating poetry from academic and corporate constraints, and for honoring poetry’s lineage and craft in works that inform, inflame, and authenticate American literary production.

“I couldn’t disconnect / to do your poetics.” Doren Robbins quotes that line from Sharon Doubiago in this vertiginous study of the poet’s genre-defying literary practice. Most often literary critical work maintains a safe distance from the texts it surveys, one reads with the sensation of aerial surveillance, or of navigation by Google Maps. Not so with Robbins’s intrepid readings of Doubiago in Apocalypse Contemporary. Instead of the critical disconnect, we read eye to eye with the texts, and with Robbins’s wheeling thoughts as they come and go from Doubiago’s life and work. References from the classical to the futuristic enmesh as the critical point of view dives down between the lines, and also into the critical space between a writer and her world. Robbins’s reading of Doubiago’s Naked to the Earth leads through discourses on trauma, on the history of the lyric, on the bloody career of power and domination across the 20th century and into our own. From Baudelaire to Levertov and from Euripides to Artaud to the sacred hoops of Paula Gunn Allen’s indigenous feminism, Robbins’s study of existential and political stakes in Doubiago’s visionary work takes the reader on a radical tour of aesthetics viewed from the inside out. Is this work critical or crucial? No matter which, it’s work only artists do in the company of other artists.

Ed Pavlic, author of Who Can Afford to Improvise: James Baldwin and Black Music, the lyric and the listeners. 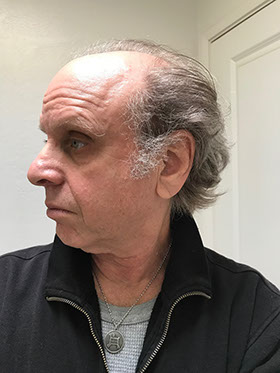 Doren Robbins’ writing and mixed-media art has appeared in many publications, including The American Journal of Poetry, The American Poetry Review, Angry Old Man, Another Chicago Magazine, Caliban, Cimarron Review, Empty Mirror, Exquisite Corpse, Hotel Amerika, The Iowa Review, Nimrod and Sulphur. His collections of poetry have won the Blue Lynx Poetry Award 2001 and the 2008 PEN Oakland Josephine Miles Poetry Award. His 2015 collection Twin Extra: A Poem In Three Parts (Wild Ocean Press) was nominated for the National Jewish Book Council Award in Poetry. highmoonoon press will publish his book of photo-montages and poetic prose sequences, Not Fade Away in 2019. He lives in Santa Cruz, California and teaches at Foothill College.