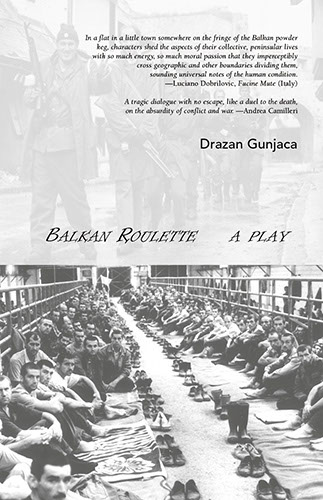 A play in One Act

Peter, army captain, enters his flat in Pula and finds it empty: his wife Ana, a Croat, has run away to Dalmatia with their children. By now Slovenia and Croatia have declared independence and the Army is retreating from Slovenia after a failed invasion. Peter, a Serb, continues to serve in the federal navy stationed in Croatia. Extremely desperate, contemplating suicide, he calls his friend Mario, also a YU captain, a Croat who has just quit the Army.

In a flat in a little town somewhere on the fringe of the Balkan powder keg, characters shed the aspects of their collective, peninsular lives with so much energy, so much moral passion that they imperceptibly cross geographic and other boundaries dividing them, plucking universal notes of the human condition.

A tragic dialogue with no escape, like a duel to the death, on the absurdity of conflict and war.

Drazan Gunjaca was born on 7th October, 1958 in Sinj where he completed his elementary education. He attended the Naval Academy in Split and spent ten years wearing the uniform of the Yugoslav Navy. In the meantime he graduated from Law School in Rijeka and discharged himself from the Navy. During the last ten or more years he has built a successful legal practice in Pula. The anti-war novel Balkan Farewells saw its second edition soon after it was first published in 2001, and it has been translated into several languages and published in Germany, Australia, USA, Bosnia and Herzegovina, Serbia and Italy.