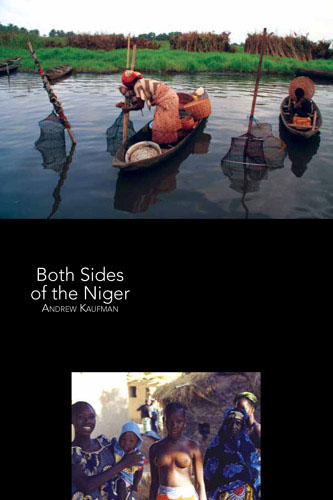 Both Sides Of The Niger

For many years I have admired the restless and generously spirited poems of Andrew Kaufman. He really does go to both sides of the Niger--both literally and metaphorically. This is not only a splendid book but it's also splendid journey!

Kaufman accomplishes what few poets ever achieve – a travel and poetry book combined which is as earthy and spiritual as anything the renowned anthropologist, Levi-Straus could have written. This isn’t an Americanized poetical version of Conrad’s Heart of Darkness, but the real thing.

As in his earlier work, Andrew Kaufman once again assumes the voice and the manner of the traveler in the ancient sense of that particular character that recurs throughout eastern and western literature. In Both Sides of the Niger, the world the traveler inhabits – because he is never simply an observer here – is the otherworldly literal and figurative landscape of West Africa, where more than just hunger and dehydration are at stake. What distinguishes Mr. Kaufman’s poems from others whose work is driven by the facts and fictions of their world travels, the poems gathered here are illustrative of an obsessive and undeniable desire to be inside of the place the poet almost haphazardly finds himself in, and once there to participate as fully as possible in the pathologies of love and work that define our world and the world of cultures other than ours. This is a complicated gesture, especially when expressed in the form of poetry, and it can only be accomplished by having a craftsman’s ear for the turn of the line, a palpable generosity of spirit that understands the sameness of us all, and a regard for language that compels the poet to settle on nothing less than getting the words right. Andrew Kaufman understands these things and his poetry is therefore worthy of our attention and our praise.

As in his earlier collection, Earth’s Ends, Andrew Kaufman here takes the considerable risk of writing poems based on experiences sought, at least in part, for the purpose. They splendidly transcend reportage, largely because of Kaufman’s deep knowledge of the craft. He allows traditional verse into the poems just long enough to establish the contrasting perceptions of order in the observer’s mind and in the cultures observed. Thus he creates an exhilarating balance between the joys of discovery and the tragic limits of our understanding.

Andrew Kaufman grew up near NYC, graduated from Oberlin College, earned his MFA in poetry writing from Brooklyn College, and his MA and Ph.D. in English Literature from the University of Toronto. .His Cinnamon Bay Sonnets won the Center for Book Arts chapbook competition, and was followed by Earth's Ends, winner of the Pearl Poetry Award.  He is the recipient of an NEA award and two Pushcart poetry nominations, and his poems have appeared in numerous journals. He has also published critical work on William Blake, and written for New York Newsday and The Detroit News.  He lives in New York City and currently teaches literature at SUNY Purchase.