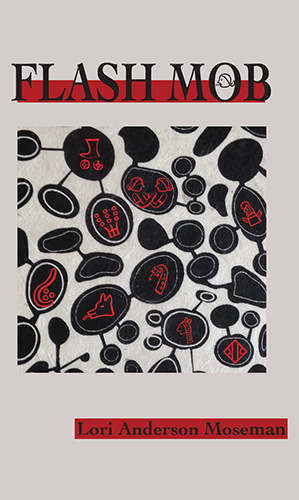 Lori Anderson Moseman’s four-part poem cycle Flash Mob investigates “the pivotal if between two uncertainties,” a biography of curving matter, both woman and number, embodied numeracy. Our heroine Dot does not stand still for anything, drawing her yawing, yawning gap ceaselessly across geographical and discursive space, poet and cipher. Driven by sound-and word-play, embroidering via expansion into the interstice where symbol and being converse, Anderson Moseman’s language dances, hovers, and sparks. Like the kerf, these poems “[study] space that is not,” potentiality’s insistent being. Variegate and heteronym, Dot refuses stability—Pearl, SilverSort, DuChampian Readymade Ancestor—our heroine’s multiplicity interfolds program and result, a chorus mining the possibilities. Even fairy tale enters the stream, Cindergal, this unit of exchange. Dot knows what she’s up to: “Desire does not change the space between increments. She can count on that.” She’s counting on us, tallying up roles dutifully performed. “There, she will flaunt a fine haunch. Here, she is passive.” Syrian refugees, chemical warfare, computation, a Brownie troop earning badges, and the CERN search for the god-particle, Flash Mob is data mine and data dump, time’s archive, Dot’s dream. Where she leans, confesses, listens, and shrinks, her ear is our ear, “nothing is shunned.”

Lori Anderson Moseman is a singularly rigorous poet in the “hocus pocus she practices.” In Flash Mob, a commanding cast of characters—Dot, Zahlen, Astrolady, Cindergal, Badgemaker, Scout Halo-foot, Pearl, Silversort, Readymade Ancestor, and Grandma No Legs (just to name a few)—gather on the page with teeth-rattling energy. Within a context of climate change, Fukushima, Hungary’s border, fires in the US west, gunmen, and the Egyptian revolution, their voices assemble patterns to create a space in our world worth occupying “as if their constellation could map the way to some we.” How do we negotiate all the violence against human beings and our planet? The last line of the collection counsels: “Moonshine’s advice is best: settle on tender voles, polish vowels. Give a hoot.” 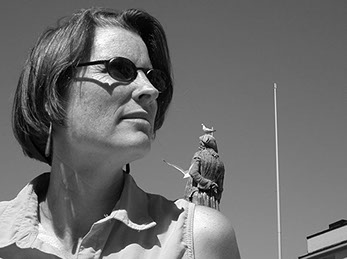