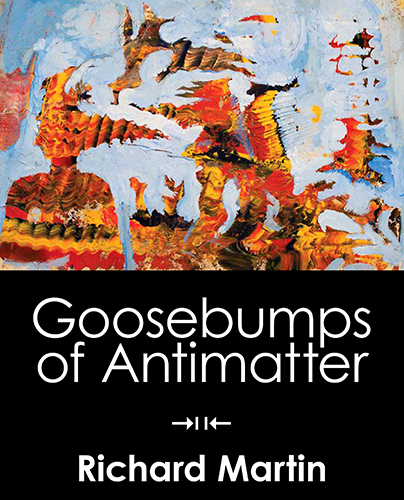 "Martin is a master of connecting seemingly disparate ideas and imagery, drawing the illuminative conclusion that within all that connective tissue lies our freedom."

Edward Dorn was tasked by his teacher Olson’s obsession with his teacher Pound’s Cantos to write a poem containing history, which he subverted by humor (“Entrapment is this society’s sole activity--& only laughter can blow it to rags.”). Gunslinger, the historical poem containing humor Dorn invented, may be the closest predecessor to boink! Dealing cards at Slinger’s table, Dick Martin proposes “Television is the olive in the martini of chain reaction,” a line Dorn would have traded on. By comparison, the emergent distraction of funny cowboy poems is merely another noisy fight down the bar.  Martin’s brand of humor, like the late master’s, is determinedly social. Only the clinically mad tell jokes to themselves, and even then Artaud kept on writing for the stage.  As neurotically self-absorbed as boink!’s speaker is, Dick Martin is paradoxically one of our unblinking social critics—and part of the power of his book derives from his relentless re-estimations of his fate as a plastic card-carrying member of the popular culture it has taken a century for late capitalism to manifest.

from Rich Blevins' review of boink! (see Appendix A)

Richard Martin’s Marks does a remarkable thing: it makes metaphysical absurdities sound as conversational as a good joke. What looks like a surrealist writing his will and sounds like an irrepressible stand-up comedian is actually, fresh, green, recognizably original poetry.

Guy Davenport, author of The death of Picasso

Altercations in the Quiet Car

I had great fun reading Richard Martin’s stories. They’re so relentlessly perverse, so acridly playful. They’re driven by a remorselessly exact self-consciousness that refuses to accept the limits of its own powers of expression, a kind of anti-textuality that keeps pulling the rug out from under itself.

Stephen-Paul Martin, author of The Ace of Lightning 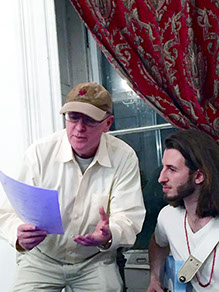