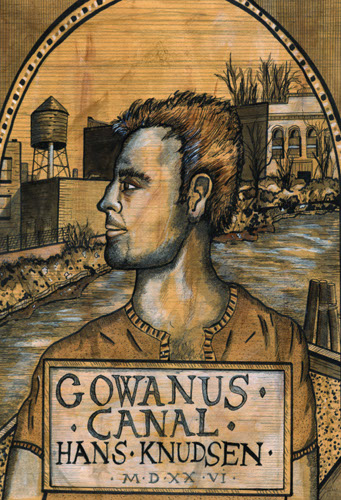 Not since Susan Sontag’s debut with The Benefactor has a first novel been so convincing. Welcome to a powerful new voice!

Edward Field, author of The Man Who Would Marry Susan Sontag

Gowanus is at times hilarious and at others edifying, slyly taking on complicated questions of art and religion—buried as they are in Knudsen's rambling bluster.

Gowanus Canal, Hans Knudsen is a novel of ideas unlike most written these days.  Knudsen is a new Stephen Daedalus—but lacking a coherent tradition to rebel against as he misfires his way through doctrine and avant garde theatre into a deep sadness, one that exists in direct confrontation with the elated “new new world” of

late capitalism. In Knudsen’s world people speak in fits and starts, and understand one another little better.  In his portrait of a character ground down in a world where logos have replaced logos, Thilleman gives us a compelling novel, leaving us to clutch after what really matters.

Communication becomes a comic routine, more often than not, played purely for laughs…. And it is not merely the pretentious theatre people, there is little meaningful communication between any of the characters in the book, whether it’s the…kitchen worker who insists that he has done his half of the closing chores, the Yugoslavian immigrant who is pitching a play out Tito as a hero of the people, the waitress who wants praise for her photos, the Professor of Theology who uses the Thirty Nine Articles as a club to beat down opposition….Knudsen’s own communication often borders on the absurd. At times pretentious: “Abstract isn’t bad as long as we understand collectively what abstract actually means. If we visualize it and not relegate it a concept or some such.”

One of the major performances of Gowanus is, at least for me, the irritation it should provoke to the bourgeois reader in the same way the surrealist and the dada writers, to bring here just the name of Boris Vian in L’arrache-coeur, did. ... Thilleman’s book clearly proves the dynamic character of reasoning over against the static character of facts. The rich referential dimension of reasoning--which obviously upstages the inferential dimension of facts--is reduced to simple pretext. And this is, without a doubt, a strange victory against any traditional epic!

Cogito ergo sum. But for us postmoderns that’s not enough because one might get involved in an aleatory theatrical performance and the dictum could change into something like “I act and therefore am nothing real.” As an oddball Christian, I much admired the honest handling of theology and its discontents. For Nietzsche, the death of God opened the way for the creation of the Ubermensch. (Never mind the stupid-ass Nazi's who never got anything right—Nietzsche, Wagner, Beethoven.) But for us postmoderns the death of God tends to open only the abyss.

Asks the age-old question: Which is more powerful—Fire and brimstone or piss and vinegar? The result is a smoldering, powerful mixture of unforgettably poetic language, absurd reality and East Village experimental theater.Gowanus isn't afraid to ask life's big questions and have fun with the myriad of possible answers.

Aaron Zimmerman, author of By The Time You Finish This Book You Might Be Dead

Gowanus is serious, profound, and horrifying in its indictment of the various poisons in which we swim. I'm reading Domby and Son just now, and Thilleman’s sections on the canal per se are nothing short of Dickens' tour de force on the toxic railroad. The language Gowanus employs ranges from incisive to superb, images that are often startling and unique. The world it explores—even though it is so physically constricted—contains many worlds of culture and feeling from lowest to highest, from rank to sublime, each tainted, one with the other. Marc Estrin, author of Insect Dreams On the banks of Gowanus Canal, a fetid stream in a squalid Brooklyn neighborhood, Hans Knudsen, son of a liberal Lutheran minister, seeks among the warring pressures of consubstantiation, transsubstantiation, and no-substantiation, the old world and the new-new world, the ideal and the real, the Cogito and the un-self, Martin Luther and Descartes, the abstract and the concrete, for a way into modern, post-religious culture, hope, and life.  Among such streets as filthy Luquer Street, in consort with such characters as Ms. Dubias, and searching for consolation in the muddy waters of the Gowanus Canal, Hans Knudsen disappears into a world occasionally enlightened by irrational brightness, often descending into beautiful (beatific) melancholies. With the quickstep of a few overall and some internal literary inventions, Tod Thilleman has written not so much a novel as an investigation, a bildungsroman whose hero has no magic mountain to ascend or descend, but who yet desires that the intellectual and spiritual contexts for a life might still exist.

Martin Nakell, author of Two Fields That Face and Mirror Each Other

Harriet Sohmers Zwerling, author of Notes of a Nude Model and Other Pieces

What a read.  A staggering, stunning book. Its eventual readership will bring it into a final focus, for, from the way i read it, it takes a while to settle.  I was reminded of two classical writers—voltaire and knut hamsun—the latter a nobelist who died in the l950s after espousing the nazi cause!  But his novel “hunger” was an enthralling experience when I read it years before the war. That nameless narrator reminds me so much of Hans, and Hans’s ups and downs and various run-ins reminded me of Candide and his little company.

Tod Thilleman moved to New York at the age of 18 and worked for abrief period with Pace Editions. He is the author of numerous poetry collections and the novel Gowanus Canal, Hans Knudsen. From 1991-1999 he was editor of Poetry New York: a journal of poetry & translation.