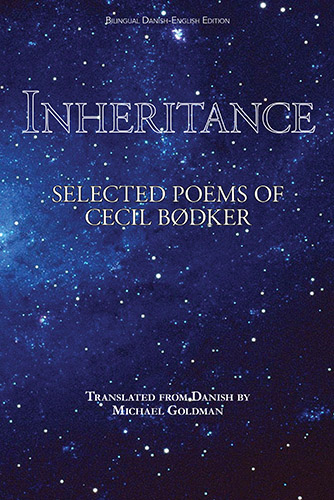 “Shouldn’t we own the stars, we who govern the order of all things, shouldn’t we each own a star?” Cecil Bødker’s answer—and ours—can be found in this impressive collection, where Michael Goldman’s exceptional translations bring us her sparse, poetic portrayals of natural phenomena mirrored in the multifaceted conflicts of the human mind: “Everything in my beautiful garden I own but none of it is mine.” Her poems convey essential reflections on the source of the alienation of modern humanity: “Since we live in surfeit we forget what life is.” Bødker’s universal and persistently relevant poetry is finally available to a large audience.

Whether it’s a butterfly “kicking off its cocoon,” larks singing “across flat farm country,” a dawn that “kneels in the grass / quenching its thirst / in the damp footprints of night,” or the poet’s own “urge to be a squirrel,” the poems in Cecil Bødker’s Inheritance are grounded in the physical world and transformed by her alert and always surprising imagination.  Michael Goldman’s faithful translations bring us nearly four decades of this Danish poet’s work—equalling both its subtle music and astonishing clarity.