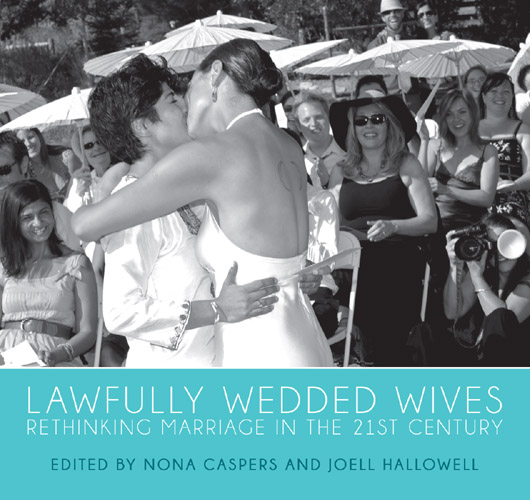 Rethinking Marriage in the 21st Century

20 tales of love, sex, and commitment in the 21st Century—spiritual and scandalous, philosophical and trivial, heartbreaking and hilarious. Every day, thousands of loving couples come together to make a simple legal commitment to each other, but the narrators of Lawfully Wedded Wives tell the unique first-person stories of marrying in the months immediately following the California Supreme Court’s 2008 decision that it was unconstitutional to deny marriage rights to gays and lesbians. These stories are now more relevant than ever since the Supreme Court in June 2013 affirmed that decision. Choosing to wed with varying levels of joy and trepidation, this eclectic group of women had at least two things in common: a compelling reason to rush to the altar and a stack of wedding photographs. In their own words, these are the voices of history.

"While Joell and I were interviewing people about their path to the altar, how they met, how their relationships evolved, and how they decided to wed, I was having daily conversations with my ex about who would get what furniture, who owed whom what money, the value of the flat, how to share the dog.  I worried that hearing about others’ wedded bliss might plunge me into the abyss, but instead I found myself fascinated, and surprised, by what these women were saying, the way they spoke about their love and their decision to legally marry."

Nona Caspers, from the introduction

NONA CASPERS is the author of Little Book of Days and Heavier Than Air, a New York Times Book Review Editors’ Choice and Grace Paley Prize for Short Fiction selection. Her work has been awarded an NEA Fellowship, San Francisco Arts Commission Cultural Equity grant, and an Iowa Review Fiction Award. Her work has been widely published in literary reviews, including The Sun, Glimmer Train, Kenyon Review, and anthologies including Women on Women: Brilliant Fiction by Lesbian Authors. She is a Professor of Creative Writing at San Francisco State University. 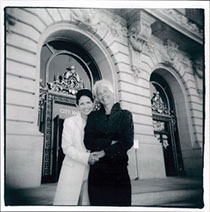 JOELL HALLOWELL (left) is a filmmaker and writer, and has conducted over 150 oral history interviews for various video and book projects. She is the Co-Editor of Take Me to the River (Heyday Books, 2010) and Shadowed: Unheard Voices (The Press at California State University Fresno, 2014). She was also an Assistant Editor for Underground America (McSweeney’s Voice of Witness, 2008) and is currently collecting interviews for a forthcoming book of stories from an eclectic assortment of California conservationists and preservationists (Heyday Books).