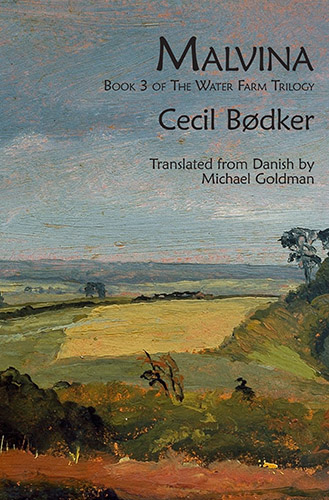 Book 3 of The Water Farm Trilogy

Cecil Bødker paints a brilliant portrait of Malvina’s journey from abused and speechless child-woman, nurtured by the love and care of inhabitants of The Water Farm, to the lion-hearted champion of other abused and speechless girls and women. And the rigid village power structure within which the abuse is systemic, mirrors uncannily our own contemporary political, social system. These stories of a woman who learns to stand and demand her own and the rights of others against their oppressors are not only inspiring, they are deeply relevant.

Patricia Lee Lewis, author of A Kind of Yellow and High Lonesome

Four years ago, Malvina left her home village in shame, penury, and despair. Thanks to the motley collection of outsiders who became her family, she returns to set things right. The Water Farm Trilogy is set in 19th century Denmark, but the class and gender discrimination are all too familiar. Cecil Bødker and Michael Goldman give us international storytelling at its best in this novel about overcoming odds and making the human connections that offer hope in dark times.

I found this final book of The Water Farm Trilogy surprising and delightful. A timeless tale of those who have and those who do not. I was cheering for Malvina, a woman who comes back from a harrowing exile to set things straight.