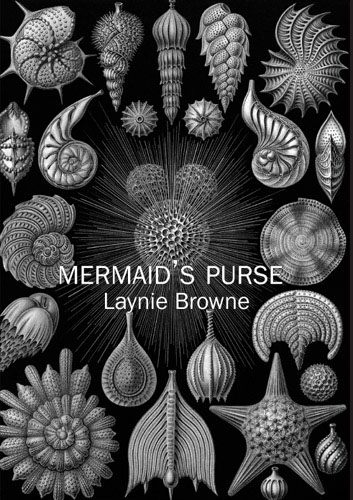 As if each hypothesis were a parasol which slightly changed the light, Laynie Browne's poems contain privileged messages from the spirit world that must be shielded from the direct rays of reality because such information might so easily disintegrate, remaining unrecognizable under the harsh glare and preoccupied manner of contemporary scrutiny. In their hushed, yet deliberate path, these works constitute a labyrinth, a gentle, ritual encircling of the tidal voice of alchemy; whose secrets are not offered to be revealed but to be reveled in,and then departed from, so that their unknowable nature may remain untouched, permitting us to leave transformed- and exhilarated.

Here, Laynie Browne shines as scientific mystic, as abstract storyteller.  She unfolds the natural world into new spaces and tales.  Language under the electron microscope: "The starfish is neither star, nor fish."   This is a completely revolutionary 'nature poetry' that is rapturously structural (like nature) and intuitively conceptual (like poetry).  Mermaid's Purse showers its complex gifts on the included reader, never the same way twice.

Laynie Browne is the author of several books, including Gravitys Mirror, The Agency of Wind, Lore and Rebecca Letters. With others, she has curated poetry series at The Ear Inn in New York City from 1992-1995, and later as a member of The Subtext Collective in Seattle 1996-2001. She was awarded The Gertrude Stein Award in Innovative American Poetry three times (1993-1996). In 1998 her work was anthologized in the book Poet's Choice, edited by former poet laureate Robert Hass. In 2000, she received a Jack Straw Writers Program Award. She has taught poetry-in-the-schools in New York City and Seattle. Currently she resides in Oakland, California.