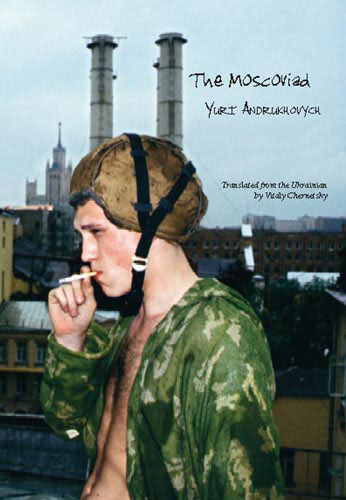 The Moscoviad, which was first published in 1993, is Andrukhovych’s third novel to be translated into English, after his debut, Recreations, and Perverzion, which is probably his best work. While his success in the English speaking world has been modest, his books have enjoyed an enthusiastic reception in Germany and Central and Eastern Europe, winning several international literary awards.  At home, he is a literary celebrity, having started out as a performance poet, he turned to prose, essays, journalism, drama, rock and jazz, and is now known as much for the political journalism as for his fiction. By introducing irreverent postmodern aesthetics to a culture which has often taken itself too seriously, his work represents a watershed in Ukrainian literature.

The literary dormitory at Moscow University becomes a kind of Russian Grand Hotel, serving the last supper of empire to a host of writers gathered from every corner of the continent, and beyond.  Young poets from Vietnam, Mongolia, Yakutia, Uzbekistan, Russia, and Ukraine assemble to study, drink, frolic, and explore each other and the decaying city around them.  When the supper turns into a bacchanal, who’s surprised? “The empire betrayed its drunks.  And thus doomed itself to disintegration.”  Part howl, part literary slapstick, part joyful dirge, charged with the brashness of youth, betraying the vision of the permanent outsider, Andrukhovych’s novel suggests that literature really is news that stays news.  Funny, buoyant, flamboyant, ground-breaking, and as revelatory today as when it was first published in Ukrainian, The Moscoviad remains a literary milestone.  In spirit and intellectual brio Andrukhovych, whose irreverence makes Borat seem pious, is kin to the great Halldor Laxness and the venerable David Foster Wallace.

Yuri Andrukhovych (b. 1960) is one of the leading Ukrainian authors writing today. A co-founder of the Bu-ba-bu poetic movement, a major cultural force in Ukraine in the late 1980s—early 1990s, he published his first book of poetry in 1985, and since then has published three more poetry collections, five novels, as well as short stories, essays, and numerous translations, including an anthology of Beat and New York School poets (2006). The Moscoviad is his second novel, originally published in Ukrainian in 1993. The awards he has received to date include the Herder Prize (2001), the Erich Maria Remarque Peace Prize (2005), the Leipzig Book Fair Prize for European Understanding (2006), and the Angelus Prize (also 2006). Andrukhovych’s writing has been translated into more than a dozen languages.

Vitaly Chernetsky, a native of Ukraine, teaches Slavic and East European literature and film at Miami University. He is the author of a critical study, Mapping Postcommunist Cultures: Russia and Ukraine in the Context of Globalization (2007), and a co-editor of the anthology Crossing Centuries: The New Generation in Russian Poetry (2000). His translations from Russian and Ukrainian have appeared in the journals boundary 2, Five Fingers Review, Mantis, Talisman, and Two Lines, and such anthologies as Contemporary Russian Poetry, New European Poets, Out of the Blue, and The Poetry of Men’s Lives.