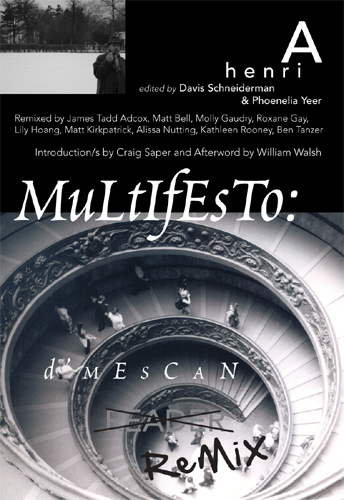 & an afterword by William Walsh

Open Multifesto anywhere, careful reader, and your feet will come unmoored from the ground, your liver will be eaten by hungry jackals, substituting for an eagle, and your eyes, feeding your brain phrases such as I AM READING A BOOK, will grow thick with beautiful cataracts. The text spins like a square planet into untold dimensions of heat and light-where heat, no longer warm, and light, no longer bright, are free to assume new costumes in a Mardi Gras drag show.

Raymond Federman, author of Return to Manure (FC2), and twenty other books of fiction, poetry, and criticism

Very seldom does a book come along that's as difficult to characterize as Davis Schneiderman's Multifesto: A Henri d'Mescan Reader, a baroque architecture of writing, a wedding-cake of literary history, criticism, politics, and art. It's as though Duchamp, Deleuze and Guattari, and Burroughs have collaborated to create a work that is part artist book, part biography, part album, all send-up-a work that is determined to throw the definition of literature into flux once again.

Steve Tomasula, author of The Book of Portraiture (FC2), VAS: An Opera in Flatland (Chicago),

and In & Oz (Ministry of Whimsy)

Davis Schneiderman is a multimedia artist and writer and the author or editor of ten print and audio works, including the novels Drain (TriQuarterly/Northwestern), the DEAD/BOOKS trilogy from Jaded Ibis [including Blank: a novel (Jaded Ibis), with audio from Dj Spooky, and the forthcoming [SIC] and INK]; and the co-edited collections Retaking the Universe: William S. Burroughs in the Age of Globalization (Pluto) and The Exquisite Corpse: Chance and Collaboration in Surrealism's Parlor Game (Nebraska). His creative work has appeared in numerous publications including Fiction International, The Chicago Tribune, The Iowa Review, TriQuarterly, and Exquisite Corpse, and semi-regularly in The Huffington Post, The Nervous Breakdown, and Big Other. He is Chair of the English Department at Lake Forest College, and also Director of Lake Forest College Press/&NOW Books. He edits The &NOW AWARDS: The Best Innovative Writing. He can be found, virtually, at davisschneiderman.com

Phoenelia Yeer is an Assistant Professor of General Rhetoric, Writing, and Composition at SUNY Vestal, and trustee of 49 original letters between Henry Mescaline and his 1960s Atom Press editor, David Schneiderman. She is co-editor of the current collection, Multifesto: A Henri d'Mescan Reader Remix, and has written extensively on collaborationist artists and literary inhabitations. Her critical study, Psalmanazar and Chatterton: A New Dialogue (Ossian Books, 2001) won the prestigious Charles Bertram prize for scholarly publishing in 2002, judged by James Macpherson. She has lived near Reykjavík, Helsinki, and Kigali, although originally from Altoona, Pennsylvania; she lives with her daughter and polydigital cat.