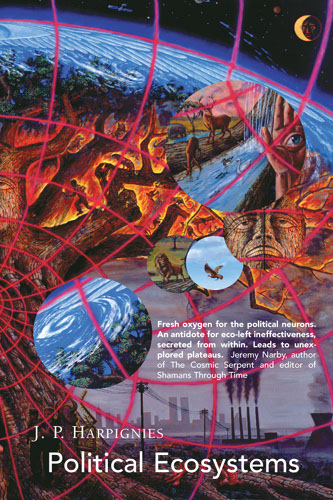 Modernity, Complexity, Fluidity and the Eco-Left

Harpignies cautions his fellow environmental progressives not to "assume, consciously or unconsciously, that our position is the only one at which an intelligent person could arrive." The left, as he points out, "suffers far more from a blind faith in the power of its logical arguments than the right." And that may be why so many savvy greens went into shock that John Kerry didn't win. But Harpignies points out that conservatives need coalitions to win, and that these coalitions are vulnerable. As he notes, activists will have to find the weak spots. "E" magazine

Much of Political Ecosystems dwells on political rather ecological concerns, and often the book feels like a strategy plan for the left-of-center polit-ical establishment to fight back against the neoconservatives. But Harpignies’ insights and cogent arguments for re-thinking the environmental debate are too important to ignore. NY Resident

Political Ecosystems is a highly original text which argues that those of us who are left-progressives and environmentalists need to engage in rigorous political self-examination to arrive at far more realistic assessments of our strengths, weaknesses and blind spots, and that we need to cultivate far more sophisticated ways of looking at the socio-cultural panorama if we want to fare better in achieving at least some of our goals.

We are urged to look at political landscapes as dynamic, complex, evolving “ecosystems” and to use a wider variety of “lenses” than only a right/left polarity to analyze socio-political conflicts. There are many deep rifts in our society that are better understood by looking at other, rarely discussed, often largely unconscious divides, such as, for example, communitarian/libertarian or techno-utopian/neo-Luddite tensions that often cut across traditional political allegiances. Understanding these and other rarely examined ideological fault-lines can enhance our ability to forge unlikely coalitions to win victories on specific issues.

This book also contains some very unusual perspectives on topics such as:

—Culture and art’s tangled relationships to politics; the overlooked aesthetic dimensions of political movements, i.e., how the tone and authenticity of activists is crucial to conveying the value of their positions non-verbally, and why the left’s frequently hysterical and arrogant tone is counter productive (and a discussion of the historical roots of that malady).

—The importance of honestly confronting the mix of utopian and pragmatic elements in our personal political stances and in our movements.

—The need to understand that major political struggles are very long hauls, centuries’ long battles for the souls of civilizations, so that we are not limited to constant crisis mode responses.

—The value of understanding our opponents more deeply, inhabiting their worldviews in thought experiments, and coming to grips unflinchingly with the harsh realities of the frequently inhospitable, deeply conservative American political “terrain.”

This deeply informed but accessible book is a polemic, but an extremely unorthodox one in that it does not promote specific views or positions. It is not interested in telling us what to think, but cares deeply about how we perceive. It seeks only to inspire left/progressives to expand the fluidity and flexibility of their approaches to politics in order to develop more expansive views of modern conflicts and, ideally, more effective strategies and tactics.

J.P. Harpignies, a radical “new left”  student activist in the late 1960s and early 1970s in the U.S. and Europe, has been involved with many environmental causes. A former program director at the New York Open Center and contributing editor to itsmagazine, Lapis, he is an associate producer of the annual Bioneers environmental conference as well as a program consultant and conference producer for other organizations. He is the author of Double Helix Hubris (Cool Grove, 1997), a polemical critique of genetic manipulation, and co-editor (with Kenny Ausubel) of the first two titles in the Bioneers book series: Ecological Medicine and Nature’s Operating Instructions (both Sierra Club Books, 2004). He is also a long-time instructor of Taijiquan based in Brooklyn, NYC.