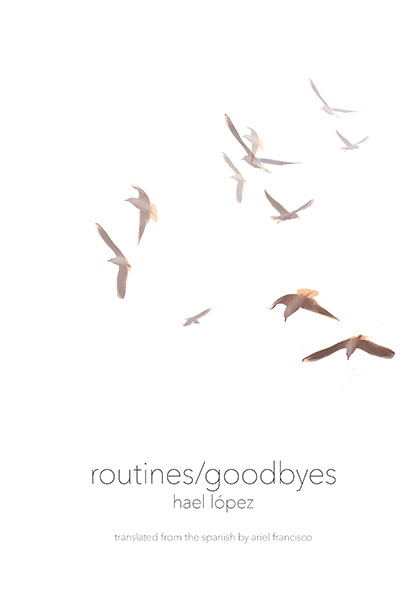 translated from the Spanish by Ariel Francisco

Hael López’s poems hum with the soft insistence of the ocean overheard in a seashell. Attuned to loss, longing, and the risk of hurt that goes hand in hand with the possibility of care, Routines/Goodbyes is an intimate, evocative book that sings in Ariel Francisco’s translation. Raising a voice both gentle and strong, these poems continually call for the dignity of what they mourn: “Every bird should have the right / to die by night / over the sea / to be swallowed / by the restless mirror / and float on…. / They should have the right / to never close their wings.”

Minimalist in style, but unrestrained in its depth and meaning, Hael López’s debut collection, Routines/Goodbyes, is a frenetic heart calling for respite—from longing and loss, grief and nostalgia. Written in sparse, poignant lines, López’s poems assess our human urge to hold on, remember. And maybe this is what we need in this world—a writer unafraid to stay us in the difficult space between one feeling and the next.

Hael López longs to be another animal. She was born in Guatemala City in 1994, and currently resides in Quetzaltenango. In 2015 she created the blog tresnoventaytres.wordpress.com and started self-publishing both on the blog and in fanzines. In 2018 her first poetry book, Rutinas/Despedidas, was published by Sión Editorial, and since then she has participated in some other fanzines, national poetry anthologies, and literary websites. Her poems have appeared (in translation) in New England Review, Columbia Journal Online, Guernica, Poetry Northwest, Small Orange, and elsewhere.

Ariel Francisco is the author of Under Capitalism If Your Head Aches They Just Yank Off Your Head (Flowersong Press, 2022), A Sinking Ship is Still a Ship (Burrow Press, 2020) and All My Heroes Are Broke (C&R Press, 2017), and the translator of Haitian-Dominican poet Jacques Viau Renaud’s Poet of One Island (Get Fresh Books, 2023). A poet and translator born in the Bronx to Dominican and Guatemalan parents and raised in Miami, his work has been published in The New Yorker, American Poetry Review, Academy of American Poets Poem-a-Day, The New York City Ballet, Latino Book Review, and elsewhere. He is Assistant Professor of Poetry at Louisiana State University.