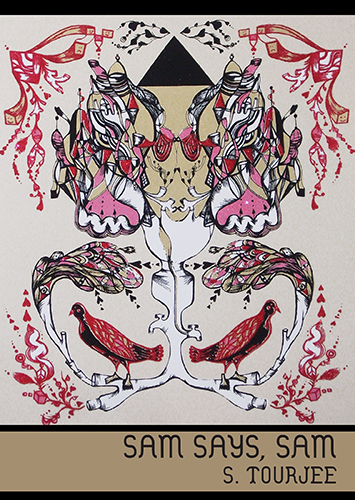 Sam Says, Sam is a hypnotic gaze into the origin of identity, its limitations, and construction. At a period of human existence where we seem to be socially evolving and devolving, this book meditates on the mutual truths that we are both individually born and universally connected. A repetitive structure connects everything corporeal—from the gnawing pain of a human body to the formation of life itself at the beginning of time. This idea is best expressed by S. Tourjee’s haunted realization that all thought is constructive and destructive at once; that who we are is learned by others and so too is it forbidden. The text cannot stray far from death and rebirth, ideas that exist in concept and in physical experience. Reading it, I am reminded that nothing ends without beginning, and that trauma, survival, fear and love are essential aspects of our lives. Aspects that have been given many names, but that we share with all things, from those things we call ourselves, to the ground that will one day absorb us.

Diana Tourjée, author of The Flawless

Sam Says, Sam rejoices and mourns the fact and feeling of our bodies as simultaneously singular, bereft, and bound together as every atom compressed at the beginning of the universe. Sam collapses the distance between Sam and Sam. Every wound lays open, bare and transforms to new limbs, new bodies, incarnations, vestiges of light guided by a voice that generously crafts for the reader a future tense.

“In the history/ of the world/ this was just/ a small moment — / Sam’s whole life.” This is how the world called Sam begins, with language, and with crystalline language that rushes forward and falls back on itself like Woolf’s The Waves, Tourjee constellates a net of awarenesses that call itself Sam. As Sam pronounces Sam, conjures Sam, Tourjee shows us that being mediated by language is being made by language, and being survived by language after the body exits the net.

Sam Says, Sam is alive with bird and “potential bird,” a powerful meditation on claiming one’s place and one’s possibilities in the world. Tourjee’s extended series of taut, precise phrases reveals a mind intensely at work, encountering the insufficiencies of the body and the limitations of language and category. Sam Says, Sam is a work of self-creation and self-transformation and as readers, we witness, transfixed, the poet uttering the self into existence, “exposed, “on the verge of it,” and then, triumphantly, “unafraid.”

Mary-Kim Arnold, author of Litany for the Long Moment

What’s in a name? A system, a second name, a stranger, a Sam. A palimpsest, the null and void: { }. Gertrude Stein permutated into ribbons. The ghost of Inger Christensen. In Sam Says, Sam, Tourjee writes from a liminal space between avatars, containers, gravities, multiverses, animals, and plants. The result is an elegant book where sound invents feeling, and where what is captured is “a small moment—Sam’s whole life.” 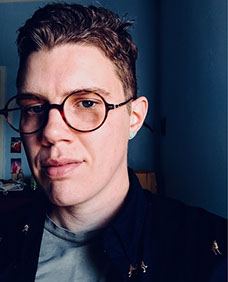 S. Tourjee lives and writes and works and teaches and makes collaborative things in Providence RI. They are the author of the chapbooks Ghost and When Tongue Was Muscle, both published by Anomalous Press.