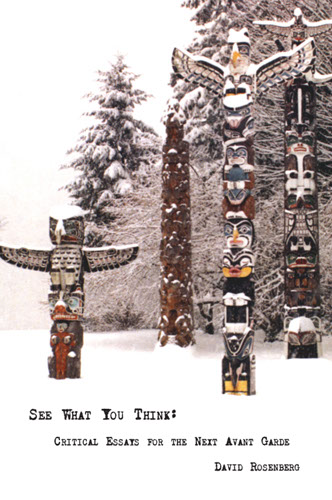 See What You Think

Critical Essays for the Next Avant-Garde

Above all, I love the tone: unexpected, at times outrageous, seemingly relaxed but actually urgent, inspiring, lifting, elevating—quintessentially Rosenberg.

What do we mean when we speak of visionary poetry?  From the uncanny vision of the group birth of John Ashbery’s “Self-Portrait In a Convex Mirror” at Kenward Elmslie’s Vermont summer house, to the poet-filled NYU classroom of Harold Bloom, to the Vancouver archive of bp Nichol, translator/poet of Sumerian cuneiform, back to Eden itself as it is revealed in the Kabbalah, David Rosenberg’s trajectory has led him through all the “sublime disguises” that the visionary must assume in order to speak his gnosis. These essays are addressed to “the next avant garde”—not fashionable bohemians or recherché theorists, but dedicated trackers on the evolutionary path. Beyond the illusion of schools and styles, Rosenberg knows that poets are the ecologists of Paradise.

David Rosenberg has pulled off a quirky, original and persistently stimulating and entertaining book.  He has kept the faith with the avant-garde, while transcending its limitations and hermeticisms.  A delicious achievement.

David Rosenberg’s essays inhabit that borderland where art and science, spirit and body, the literal and the metaphorical, the human and the non-human, the oral and the transcribed all blur together. Rosenberg is uninhibited in the best sense of the word, and his essays are inspiring reminders of just how strange it is to be human, trailing an evolutionary past and dreaming of a limitless future.

Nothing else is like these pieces. There is a certain dream character to them, as when we recognize everyone in the room, except that they are different. As in a transforming mythography, they are the same and not-same.

Of David Rosenberg's books in the past decade, two have been New York Times Notable Books of the Year, while a third, A Poet's Bible, was given the PEN/Book-of-the-Month Club Prize, the first major literary award for a biblical translation. Rosenberg's The Book of J, with commentary by Harold Bloom, was a national bestseller.  More recently, his 1973 volume, The Necessity of Poetry, was restored online (chbooks.com) and his book on the Kabbalah, Dreams of Being Eaten Alive, has been released in paperback. Residing in Berkeley with his wife, the writer Rhonda Rosenberg, he is completing the second biography of Abraham.