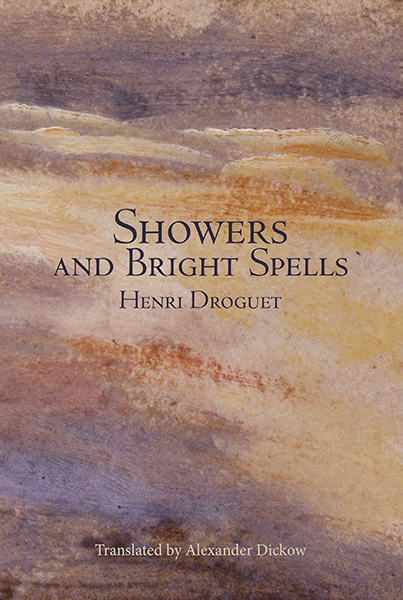 translated from the French by Alexander Dickow

Henri Droguet provides a sense of the thickness, of the incredible consistency of the world. He mixes it up, he loves it, but he runs up against it ceaselessly. So he grumps, whistles, moans in his little ironic melody, by way of revenge. There is at bottom a real distress, without self-indulgence, which does not withdraw into the consolation of elegy, but persists in trying to reestablish dialogue—which is to say to give and take blows in a language at once choppy and square, full of ruptures that produce rhythms, of images that catch the visible and blind substance off its guard, of little songs that grate, mock, splinter. It all sounds true. And the paradox is that this poetry of laceration and conflict becomes invigorating through its firmness, its tonicity, and through the spirit that pervades it.

Henri Droguet’s savvy derangements of language call for a super-savvy translator, and found that prestidigitator in Alexander Dickow. With neologisms, internal-intestinal rhymes, arcane diction, a fierce wit, Droguet creates dreamscapes at once linguistically fraught and true to his North Atlantic habitat. His song, he says in “Soliloquy,” is “spasm   hemorrhage/ epiphanic and black.” These are poems of mortal intensity. 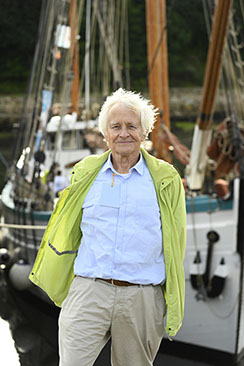 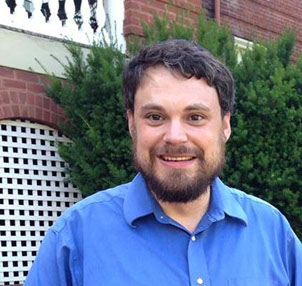 Henri Droguet was born in 1944 in Cherbourg, Normandy. He studied history and literature at the University of Caen. Until 2004, he taught literature in Saint-Malo, where he has lived since 1972. He has published some dozen collections of poetry, most with Gallimard; the latest, Grandeur nature, was published by Rehauts. He has also published two books of prose, the most recent with Fario Editions, is called Faisez pas les cons! When he is not reading, he writes; when he is not writing, he gardens, he wanders, he runs to the opera house, he sails from Saint-Malo to Lorient, or else out toward English Cornwall, the Scillies, Ireland.

Alexander Dickow was born in Lexington, Kentucky, and grew up in Moscow, Idaho. He is associate professor of French at Virginia Tech, and a novelist, translator, scholar and poet who writes in French and English. His latest book is Le Premier Souper, a novel published by La Volte in 2021. Forthcoming translations include works by Sylvie Kandé and Max Jacob.