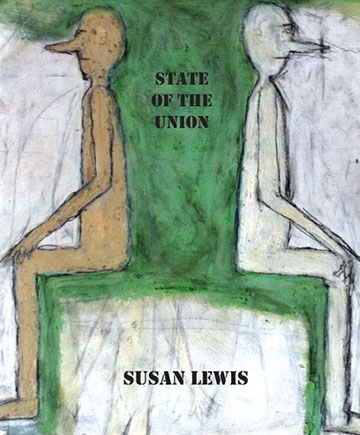 State of the Union

Lewis’ poems could be summarized as quirky wordplay ping-ponging around the subject of marriage: “By which I mean surprise is like a pill, to be swallowed.”

There is a wonderful quality of quick composition to some of these pieces, jazz riffs that bounce across the page, taking nothing away from the quality of composition and the sharpness of thought.

A cry for the unfiltered, unarmored, connection.

WORDPLAYS & PLAYFULL WORDS. A humor throughout but serious, also. “This is not a movie / but now & then it feels like one...” A poem enters stage right, philosophizes, comments, does stand-up, all at the same time, then exits, stage left. Reappears as itself, redressed, or as someone else, from another direction, or perhaps the same, returns to the format though with changed ratios. The appearances, the poems, are incremental, synergistic. Susan Lewis’s State of the Union addresses, in a series of singular poetic soliloquies, both the state of nature & the natural state of life.

Susan Lewis’ prose poems take off at a frenetic pace, dashing old ideas of order and replacing them with a rush of wickedly witty puns, jolts, jabs, and reversals of colloquial speech. It’s as if she’s foraging for and forging a new language to speak about “this overload of blurred identities” living in an age where “there is not enough time for these times.” At the center of this high-speed chase between public and private, self and other, Lewis is a reckless realist determined to stand her shifting ground in order to reach us.

Full of laughter, a razor sharp eye, and a barrage of surprises, Susan Lewis’s State of the Union propels us through multiple registers of relation, never slackening or losing focus in her furious push toward a love poem worthy of a “subject which has expired for lack of correct change.” From complexity which leads “to one wandering eye & a convoluted appetite,” to simplicity which leads to “albinism & and continuous irrepressible hum,” Lewis’s impeccable attention to the “song of the illusive spheres” will leave you stunned and in stitches.  It is an absolutely (disturbing) delight.

Lewis’s flash fiction has been performed in Denver’s “Stories on Stage” series, her collaborations with composer Jonathan Golove have been performed at the Kennedy Center and Carnegie’s Weill Hall, and her collaborations with artist Melissa Stern have been exhibited in New York City and Seattle. She is Managing Editor of MadHat Press, MadHat Annual and MadHat Lit, and guest editor of Altered Scale and Right Hand Pointing.